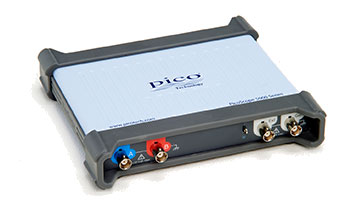 Today’s electronic designs employ a wide range of signal types: analog, digital, serial (both high- and low-speed), parallel, audio, video, power distribution and so on. All need to be debugged, measured and validated to ensure that the device under test is functioning correctly and within specification.

To handle this variety of signal types, PicoScope 5000D FlexRes hardware employs multiple high-resolution ADCs at the input channels in different time-interleaved and parallel combinations to optimize either the sampling rate to 1 GS/s at 8 bits, the resolution to 16 bits at 62.5 MS/s, or other combinations in between – you select the most appropriate hardware resolution for the requirements of each measurement.

2 and 4 channel models are available, all featuring a SuperSpeed USB 3.0 connection, providing lightning-fast saving of waveforms while retaining compatibility with older USB standards. The PicoSDK® software development kit supports continuous streaming to the host computer at rates up to 125 MS/s. The product is small and light, and operates silently thanks to its low-power fanless design.

Supported by the free-of-charge and regularly updated PicoScope software, the PicoScope 5000D Series offers an ideal, cost-effective package for many applications, including design, research, test, education, service and repair. 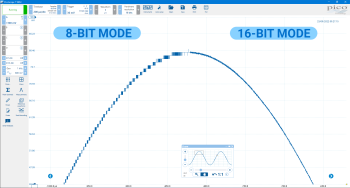 PicoScope 5000D Series oscilloscopes have waveform capture memories ranging from 128 to 512 million samples – many times larger than traditional benchtop scopes. Deep memory enables the capture of long-duration waveforms at maximum sampling speed. In fact, the PicoScope 5000D Series can capture waveforms over 500 ms long with 1 ns resolution. In contrast, the same 500 ms waveform captured by an oscilloscope with a 10 megasample memory would have just 50 ns resolution.

Deep memory can be useful in other ways too: PicoScope lets you divide the capture memory into a number of segments, up to a maximum of 10 000. You can set up a trigger condition to store a separate capture in each segment, with as little as 1 µs dead time between captures. Once you have acquired the data, you can step through the memory one segment at a time until you find the event you are looking for. Powerful tools are included to allow you to manage and examine all of this data. As well as functions such as mask limit testing and color persistence mode, PicoScope software enables you to zoom into your waveform by a factor of several million. The Zoom Overview window allows you to easily control the size and location of the zoom area.

Other tools, such as DeepMeasureTM, serial decoding and hardware acceleration work with the deep memory, making the PicoScope 5000D Series among the most powerful oscilloscopes on the market. 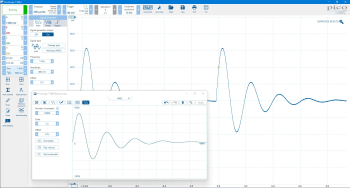 All PicoScope 5000D units have a built in 14-bit 200 MS/s arbitrary waveform generator (AWG). You can create and adapt arbitrary waveforms using the built-in editor, import them from existing oscilloscope traces, or load a waveform from a spreadsheet. 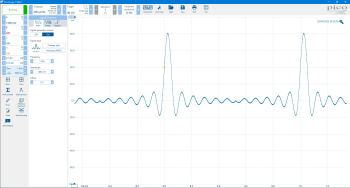 The AWG can also act as a function generator with a range of standard output signals, including sine, square, triangle, DC level, white noise and PRBS. As well as the basic controls to set level, offset and frequency, more advanced controls allow you to sweep over a range of frequencies.

Combined with the spectrum peak hold option, this makes a powerful tool for testing amplifier and filter responses. Trigger tools allow you to output one or more cycles of a waveform when various conditions are met, such as the scope triggering or a mask limit test failing. 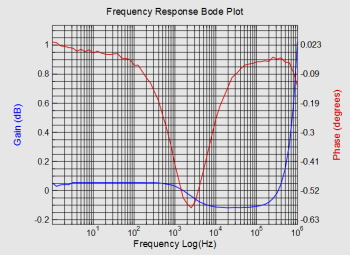 The software development kit (SDK) allows you to write your own software and includes drivers for Microsoft Windows, Apple Mac (macOS) and Linux (including Raspberry Pi and BeagleBone).

Example code shows how to interface to third-party software packages such as Microsoft Excel, National Instruments LabVIEW and MathWorks MATLAB.

There is also an active community of PicoScope users who share code and applications on the Pico forum and PicoApps section of the picotech.com web site. The Frequency Response Analyzer shown opposite is one of the most popular third-party applications. 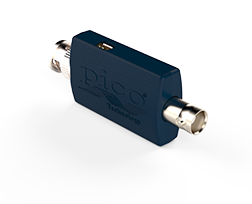