A small model airplane gets most of its forward thrust by a propeller. The propeller is driven by either an internal combustion engine or electric motor. The angular velocity, or speed at which the propeller revolves, is generally measured in Revolutions Per Minute — RPM — with the thrust of the airplane being directly proportional to the RPM of the propeller.

For this experiment a small model airplane with two propellers, each with two blades, was used. The idea is to use the light sensor of the DrDAQ to measure the frequency of a revolving propeller. A simple flashlight is used as a light source. As the propeller consists of two blades the beam of light from the flashlight will be interrupted two times with each revolution of the propeller.

DrDAQ is used to measure the frequency (f) in hertz (cycles per second) of the light beam, and from this the RPM can be calculated:

The meter function in PicoScope can display the frequency in hertz, or it can be calculated manually by measuring the displayed waveform. In this case the frequency would be:

To measure the RPM the model airplane was tied to a chair in an upright position so that the propeller is faced downward (as shown in Figure 1). The flashlight was fixed to the top, while the DrDAQ data logger was kept at the bottom. The distance of DrDAQ was adjusted by placing it on several books, with care taken not to place it too close to the propeller. 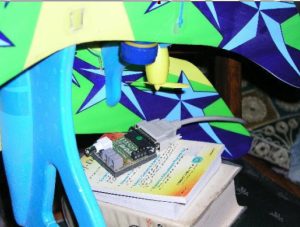 Figure 1: Measuring the RPM of a propeller using DrDAQ 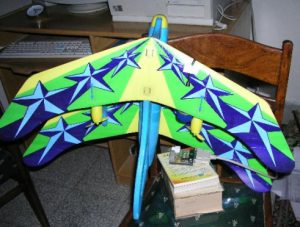 In the pictures above the flashlight is shown very near to the propeller only for demonstration purposes. In actual practice, the flashlight should be kept higher and adjusted so that a clean shadow of the propeller is formed. To prevent any possibly interference that could case measurement errors, all nearby artificial lights such as tube lights, lamps, etc should be switched off.

When the equipment was correctly positioned, the light source is switched on and the vertical scale in PicoScope is adjusted so as to show a clear line. Then, using the remote control of the aeroplane, the propeller is started. After a short time the displayed waveform should stabilize. At this stage the waveform and the meter can be stopped and the results noted.

This experiment could be extended to fully investigate how the diameter of the propeller, together with the number of blades, blade pitch and RPM affect the aircraft’s thrust.

Alternatively, a variation of this experiment could be to use a small DC electric motor and invesitgate how the RPM of the motor is related to the current flowing the armature of the motor.