The use of fossil fuels and other industrial processes has led to a build-up of greenhouse gases in the atmosphere. Since 1896 it has been known that these gases (carbon dioxide, methane and nitrous oxide) help stop the earth’s infrared radiation from escaping into space and it is this that maintains the Earth’s relatively warm temperature. The question is whether the measurably increasing levels of carbon dioxide in the atmosphere over the last century will lead to elevated global temperatures, which could result in coastal flooding and major climatic changes and have serious implications for agricultural productivity.

The following experiment allows students to compare the thermal properties of carbon dioxide with those of air and can be extended further to include water vapor. 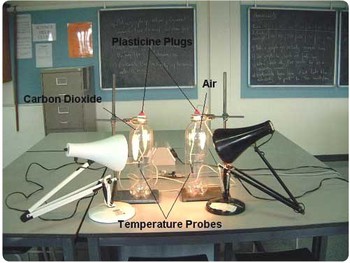 Even over a small time period such as 20 minutes we are still able to get a difference of 4 degrees in temperature between the two samples. Students may not be impressed with such a small temperature difference in the lab. However, it needs to be stressed that scientists are in general agreement that an average increase of just 2 degrees celsius across the planet could have catastrophic effects on crop production and cause sea levels to increase significantly resulting in major flooding.