By combining the Speake FGM–3 Magnetic Field Sensor, and the Pico ADC-16 data logger, a simple instrument that is capable of monitoring and recording the minute changes in the Earth's field may be realised at low cost.

This experiment describes the practical realisation of an instrument based on the data sheet that accompanies the Speake FGM-3 sensor, and the LM2917 frequency / voltage converter.

Objectives of the experiment

The primary objective of the experiment is to monitor the Earth’s magnetic field, but the secondary objective is to utilise a simple approach using the data sheets for the devices, and by calculating the component values.

Description of the circuit

As described in the data sheet that accompanies the FGM-3, there are 5 subcomponents to the experiment, they are:

The FGM-3 sensor has an operational range of approximately ± 50 microtesla, requires a supply voltage of 5 volts at about 12 mA, and outputs a rail to rail rectangular pulse whose period is directionally proportional to the field strength so that the output frequency is inversely proportional.

The data sheet quotes a typical frequency range of approximately 120 kHz to 50 kHz, the devices do vary, but typically the frequency for the current local field is about 65 kHz. This is divided by two using half a 4013 D-type.

The local clock generator is based on a hex inverter and uses a 32 kHz watch crystal so that it is stable.

The digital mixer is one half of a 4013 D-type bistable with the clock driving one input, and the FGM-3 sensor driving the other, with the set and reset pins tied to ground.

The output from the device on the Q pin will be the difference between the two frequencies which, for the purpose of this experiment is set to approximately 500 Hz.

The output of the 4013 may also be connected to a spare inverter on the 4069 to provide a buffered output to a frequency counter if desired.

The output frequency is converted to a voltage via an LM2917 device whose output is reduced through a voltage divider to ensure that it remains within the measuring range of the ADC-16, i.e. < 2.56 volts.

An LM35D device is used to monitor the temperature at the sensor to provide the information required to recalculate the value derived to compensate for temperature variation.

The device is thermally coupled to the module that it is monitoring by being located in the same enclosure as the device and being given sufficient time for the modules to achieve thermal equilibrium.

The physical layout is not critical, but a neat logical layout will be easier to work on.

The sensor itself should be located where the ambient temperature is fairly constant, and it will not be disturbed. It should also be located away from any external influences, which includes anything that will change the local magnetic field.

Output impedance of the sensor is fairly low, about 330 Ω, so it can be located some distance from the rest of the circuit, but care should be taken to ensure that the cable does not pass close to any potential sources of noise, e.g. electrical machinery.

All connections should be secure, and properly protected to ensure that there is no risk of accidental shorts, ingress of moisture or accidental contact.

Sensitivity
The sensitivity of the FGM–3 is such that a swing of 1000 Hz will give a range of approximately 1000 Gamma.

This should give sufficient headroom to record magnetic storms as well as day-to-day variation.

To avoid the problems associated with approaching 0 Hz, it is suggested that the mixer is set up so that the swing is centred at, or above 500 Hz. Exact calibration is described below.

The circuit diagram for the magnetometer is shown in Figure 6 in the appendix. The manufacturer's data sheets should be consulted alongside the diagram for additional components that will be required, eg. decoupling capacitors, etc.

The sensor can be powered from the same source as the rest of the circuit, or a higher supply voltage can be provided, and the supply stabilised at the sensor end. If this approach is taken, care should be taken to ensure that the heat generated by the voltage regulator does not affect the sensor. The maximum voltage that can be applied to the FGM-3 is 7 volts, but it should be kept to 5 volts to avoid damage to the mixer device.

The supply can also be used to power the LM35D sensor used to sense the temperature of the FGM-3, but it is essential that the supply lines are decoupled at the sensor end with 10 µF and 10 nF capacitors.

It will be necessary to extend the sensor leads to reach the FGM-3 so the joints should be sleeved to avoid short circuits. If the sensor is in open air rather than insulated, the LM35DZ should be attached to it to ensure that the temperature it detects is accurate.

The clock circuit utilises a 32 kHz watch crystal to provide a stable frequency. Additional inverters may be used to buffer the signal before the 4013 mixer, and to provide a buffered output to a frequency counter.

The circuit used for the experiment is that shown in the application notes for the LM2917, and described as a ‘Zener regulated voltage to Frequency Converter’, but with calculated component values based on the formula supplied.

From the figures quoted for the sensitivity of the device, it is anticipated the device will be set to a 500 Hz difference, with a swing of ±250 Hz.

In this instance the component values selected were:

Given that the input swing of the ADC16 is ±2.5 volts, the output will be divided via a resistor chain to ensure that it remains within the permissible overhead in the event of a solar event.

The input to the LM2917 is connected to the Q output of the mixer via a polypropylene 1 µF capacitor, with a 20 kΩ resistor to ground.

The following tests may be carried out before setting the instrument up.

This should be checked before anything else is connected, or active devices are inserted into sockets.

The output should be a full supply (5 V) rectangular wave whose frequency will be approximately 32 kHz. The capacitors shown connected to ground should be appropriate for the crystal, and one can be replaced with a trimmer to vary the frequency a little if desired.

The output pin should have a 5 V square wave whose frequency will vary considerably with any movement of the sensor, horizontally, or vertically.

The output will reflect the ambient temperature as 10 mV/°C, and should be seen to react to being touched with a finger.

If the sensor is a long way from the recording device, it may be necessary to use the circuit suggested in the application notes for the device. 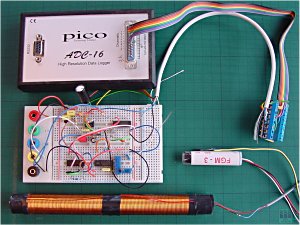 Figure 1: Completed magnetometer circuit in use

To set the instrument up it should be constructed as shown, and the sensor placed in the intended location.

So that it may be calibrated, the sensor should be placed inside a coil wound on a former that is large enough to hold the sensor, and at least three times as long. The entire assembly, including the temperature sensor should then be placed in a suitable container to provide thermal mass, and insulation, eg. dry sand contained in a polystyrene box. It should be stable within the box.

The calibration coil will have no effect unless voltage is applied to it.

The temperature sensor should be in intimate contact with the FGM-3, and also mechanically stable. If the sensor is located inside a coil former, the ends of the former should be 'stopped' with a polystyrene bung to maintain the internal temperature.

The sensor head assembly should be aligned East / West, and by making very small horizontal adjustments, it will be possible to obtain approximately 500 Hz output from the mixer. It should now be left to stabilise for several hours.

If desired, rather than moving the assembly to obtain the offset, it can be obtained by passing a small current through the coil to set up a small local offset, or by placing small magnets close to the assembly, but if this is done, they must be rigidly fixed in place once adjusted.

The calibration process is used to determine the change in magnetic field required to cause the output frequency of the sensor to change by 1 Hz, and to then measure the change in output voltage that occurs as a result of 1 Hz change.

The sensor can be calibrated to establish the change in frequency due to external magnetic fields, and you should also calibrate it to determine the change due to temperature.

It is possible to achieve a reasonably good relative calibration with simple equipment. The process is described in detail in the Application Notes for the FGM-3.

The current applied to the calibration coil should be varied, and the output of the LM2917 should be observed to obtain the nT/mV calibration for the instrument. Typically, this figure will be approximately 1.6nT/mV.

The relationship between temperature and output period is essentially linear. An accurate calibration may be achieved by monitoring the device over an extended period, and then using the copy facility to paste the temperature output, and the output from the f/V into a spreadsheet program such as Microsoft Excel.

By adding a ‘trend line’, Excel will display the formula in the form y = mx+c, where:

This formula may be used to calculate a compensated value for the variation in the local field.

Whilst it is possible to calibrate the frequency to voltage converter independently, the calibration should be derived from the process of calibrating the sensor described earlier.

The instrument should be allowed to stabilise in situ before being set up as it will take several hours for all the components to reach a stable operating temperature.

It should be observed during this period to ensure that there are no unexpected external influences affecting the sensor. The instrument is more than capable of detecting small vehicles, e.g. a Ford Ka at over 100 foot, so will be influenced by traffic.

The process of setting the system up need only be done once, the calculations required are stored with results, and may be recalled from the file as required, and can be refined if necessary.

Note, the instrument gathers data relative to the time that a recording run is started, so the current values for output and temperature are effectively zeroed at start time.

The sampling interval should be selected to reflect the desired information, for example, if a warning of a solar event had been received, the interval might be set to a relatively short period, eg. 1 minute or less. For more general observation of the near field, the sampling rate can be set to a larger interval.

If the absolute value of the local field is known, it may be added using the calculated parameters.

There are a number of stations in the world that make the current value of the near field available including SAMNET in the UK. As well as providing an instant value, the SAMNET website provides a means of checking one's results against an established monitoring station.