Calculating the Heart Rate With a Pulse Plethysmograph

When the heart beats, a pressure wave moves out along the arteries at a few metres per second (appreciably faster than the blood actually flows). This pressure wave can be felt at the wrist, but it also causes an increase in the blood volume in the tissues, which can be detected by a plethysmograph. This word comes from the Greek "plethysmos" for increase and is a term for a "fullness" (ie change in volume) measuring device. Over the years, all sorts of Heath–Robinson devices have been used but described here is a photoelectric pulse plethysmograph, which is robust and easy to make and which will allow the beating of the heart to be recorded without the need to make direct electrical connections to the body. 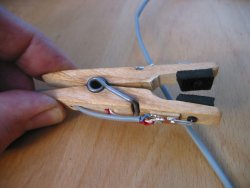 The sensor consists of a light source and photodetector; light is shone through the tissues and variation in blood volume alters the amount of light falling on the detector. The source and detector can be mounted side by side to look at changes in reflected light or on either side of a finger or earlobe to detect changes in transmitted light. The particular arrangement here uses a wooden clothes peg to hold an infra red light emitting diode and a matched phototransistor (see figures 1 and 2). The infra red filter of the phototransistor reduces interference from fluorescent lights, which have a large AC component in their output.

The peg is drilled with 3mm holes to take the led, the phototransistor, the pair of wires linking the two and the two–core screened output cable. The holes for the led and phototransistor are drilled in one go so that they line up. The ends of each side of the peg are filed on the inside to enlarge the gap and pieces of black closed–cell foam (cannibalized from a mouse mat and punched with 3mm holes) are stuck in place (Super Glue / Crazy Glue) to improve grip and make a (more or less) light–tight seal against the skin. At this point, the spring should be adjusted so that the peg will grip an ear lobe while at the same time not being so tight that it excludes blood from a finger. Pieces of stripboard glued to the peg are used to make connections to the wires; two copper strips wide for the led (anode and cathode connections) and three for the phototransistor side (collector, emitter and LED cathode, and LED anode — LED wires coming through the peg from the other side). The light–emitting diode (Siemens SFH487) and the phototransistor (Siemens SFH309FA) are wedged in their holes and soldered to their respective pieces of strip board. Neither component is critical and many other types will work. The wires are then soldered in place; the screen of the connecting lead is soldered to the emitter and cathode copper pad. Once everything has been checked and proved to work, the connections and the backs of the components should be covered with a bead of an opaque silicone rubber caulk which will insulate and keep out extraneous light. All bare wires should be covered.

The amplifier (see figure 3) uses an LM358 dual op amp to provide two identical broadly–tuned band pass stages with gains of 100. Again, the type of op amp is not particularly critical, as long as it will work at 6V and drive the output rail to rail. The signal frequencies are boxed in by movement artefacts at the low end (generated by the peg moving and distorting the underlying tissues; light pegs are better) and at the top end by mains–hum interference. The circuit runs from a single 6 Volt battery and the output zero is offset by about 1 Volt by referring everything to an internal common line at a voltage set by a pair of forward–biased silicon diodes. This is convenient for interfaces with a 0–5Volt input. The potentiometer allows the overall gain to be adjusted so as to prevent clipping on large signals. Components are not critical but the two 2.2 µF capacitors must be able to stand some reverse bias so they should be non–polarized or tantalum. The circuit can easily be made up on a small piece of strip board.

Connect the output of the amplifier to the input of the interface and run PicoLog set to record 500 samples at 20 ms intervals. Switch on and clip the peg to an earlobe or index finger; wait for about 10 seconds to allow the circuit to settle and then start recording. Adjust the potentiometer so that the output is about 2 Volts peak, the trace should then look like that in figure 4, with each pulse wave clearly visible. This was acquired using an ADC200 but with its capability of 100Ms/s it is overkill for this circuit, which should work with DrDAQ, all of the PC oscilloscopes and all but the slowest voltage-input data loggers.

Two problems are common when using a pulse plethysmograph: movement will cause the trace to swing around wildly, so persuade the subject not to move as much and if the subject is very cold (pale, pinched looking) the circulation at the extremities may be reduced to the point where there is very little signal.

A useful feature of Picolog is that, if the alarm is set to trigger at about 1 Volt, there will be a beep in time with the heart beat. Having proved that everything is working, the device can be used for such investigations as comparing individual resting heart rates, following heart rate changes during and after exercise and looking at the changes in heart rate that occur as the subject breaths in and out. For example, figure 5 shows 100 seconds of deep, slow breathing. Two effects, synchronised with ventilation, are visible: variations in heart rate can be seen as changes in the spacing between the pulse waves and variations in the stroke volume of the heart can be seen as changes in the amplitudes of the pulse waves.

Unlike many heart rate monitors, this set up will allow the calculation of beat–by–beat (instantaneous) heart rate. Using the cursor, note the times of two adjacent peaks, subtract the first from the second to give the time between the two beats (beat to beat interval) and express this in seconds. Divide this into 60 to obtain the instantaneous heart rate in beats per minute. Thus, for the trace in figure 4, the first peak is at 1052 ms and the second is at 2190 ms. The difference is 1138 ms or 1.138 s, which gives a rate of 52.7 beats per minute. The last peak is at 9206 ms, or 8.154 s after the first and as there are seven intervals between, so the average interval is 1.165 s and the average rate is 51.5 beats per minute.