Potentiometric methods of analysis are based on measuring the potential difference between two electrodes (a cell) in such a way that the current passing between these two electrodes is practically zero. One of these electrodes is called the working electrode—this has a potential dependent on the concentration of a given ion present in the test solution, for example the glass electrode depends on hydrogen ions. The

reference electrode forms the other half of the cell. This is of a fixed potential and independent of the sample composition, eg calomel electrode or Ag/AgCl (silver/silver chloride) electrode.

This experiment describes the construction and use of a low-cost four-channel high input impedance module to be used with an ADC-16 high resolution data logger to allow simultaneous four-channel pH monitoring.

The INA116P has very high input impedance (1015 Ω) which suggests its use in measurements of cell potential, especially cells of high resistance similar to those employing glass electrodes. Conveniently the INA116P can be powered by the ADC-16 as shown in Figure 1, eliminating the need for an additional power supply. 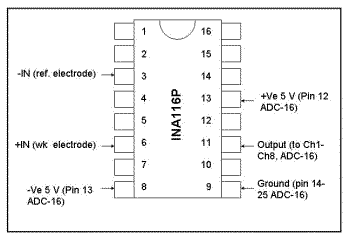 Construct a four channel module using 4 INA116P amplifiers, as shown in the circuit diagram (Figure 2.) The circuit has the following features: 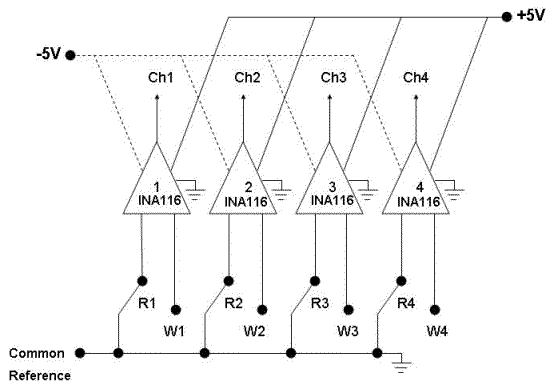 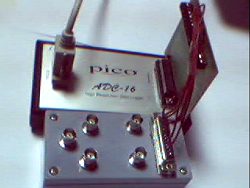 Plug in the ADC-16 data logger to a PC installed with PicoLog software.

Figure 4 shows simultaneous 4-ch pH monitoring. Each electrode is subject to 2 or 3 pH step changes. Then, each electrode was returned to its original buffer solution where the original pH values were almost recovered. This proves the reliability of the described system in accurate and reproducible pH monitoring. Of course, the quality of the glass electrode itself is essential in these measurements. 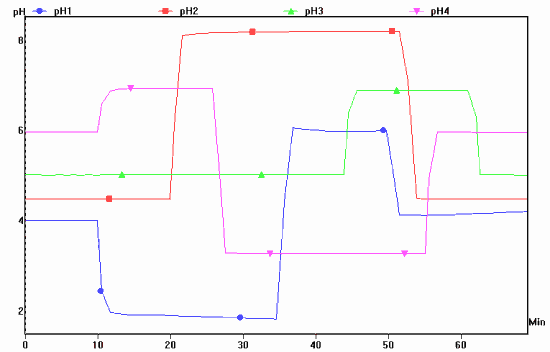 Q1: Explain why pH measurements based on glass electrodes are exceptionally more challenging in comparison to measurements with other electrode types such as metallic electrodes.

Q2: Even if the cell resistance is relatively low, which may allow data loggers with 1 MΩ input impedance to measure the cell potential, explain why it is still preferred to use high input impedance device.

Q3: Explain why the high input impedance voltmeter is commonly referred to as a pH-meter.

Q4: What will happen if you attempt to measure the cell potential of the glass/reference cell electrode directly using the ADC-16 data logger or the regular voltmeter?

Q5: Can you think of another advantage of using such multi-channel recordings?

Modify the acid base titration curves experiment to use a single titrant (NaOH) added to four different beakers containing boric acid, acetic acid, hydrochloric acid, and phosphoric acid, respectively and monitor the pH during the progress of these four titrations simultaneously.

Modify the measuring the ph of milk experiment to simultaneously record the souring rate of four different milk samples kept at different temperatures.