Recording the solar eclipse with DrDAQ 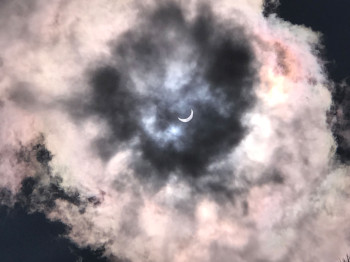 The eclipse as seen in Tyler, Texas

21 August 2017 saw a total solar eclipse cross the contiguous United States from Oregon in the northwest to South Carolina in the southeast – the first time the path of totality had passed from coast to coast in nearly 100 years, and the first total eclipse to be visible from the U.S. mainland since 1979. It was also notable because totality only passed over the continental United States – no other countries saw a total eclipse that day, the first time this has happened since 1257.

Pico’s staff in Tyler, Texas, were well outside the path of totality, but did still experience a partial eclipse with approximately 75% coverage of the sun’s surface. Technical support specialist Reggie Samples came prepared. 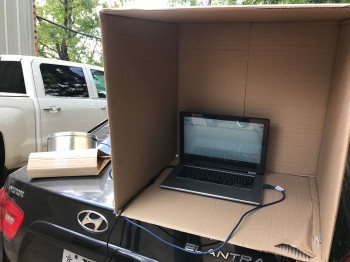 The DrDAQ is in the smaller cardboard box on the left, with filters to make sure the light sensor can detect the decrease in light.

Reggie decided to record the eclipse from two vantage points at once, using two DrDAQ multipurpose data loggers, connected to computers running the PicoLog 5 software. [2018-07-05 update: PicoLog 5 has been replaced by PicoLog 6]

Reggie positioned the first of these outdoors, using its built-in light sensor. He placed the DrDAQ inside a metal cookie tin with a hole in the lid, and placed the tin on a folded piece of cardboard, so that it was angled towards the sun. The DrDAQ’s light sensor is too sensitive for use in direct sunlight, so to prevent the signal from clipping, Reggie filtered the sunlight by cutting an anti-static bag into strips and taping these strips across the hole in the lid of the cookie tin. He added successive layers to this filter until the signal on the DrDAQ read just under 100% in full daylight. The PicoLog graph is below, on the left.

Reggie set up the second DrDAQ indoors. This time he mounted a Hengyang SC-3012DS amorphous silicon photovoltaic cell onto a south-facing window and used an MI007 60 MHz passive probe to connect it to the scope input of the DrDAQ. The PicoLog graph is below, on the right.

On both graphs, you can clearly see a period of reduced light intensity of about two hours. It is interesting to note, however, that occasional clouds passing over the sun had even more of an effect! Luckily for us, the weather was mostly good, so the overall trend is still very apparent. 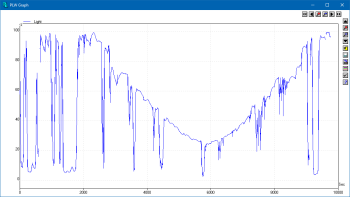 PicoLog 5 graph showing a pronounced decrease in light intensity over approximately two hours, with other spikes caused by clouds. 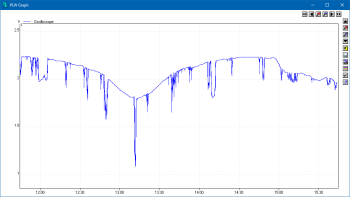 Indoors, the decrease in light intensity (indicated here by voltage from the photovoltaic cell) is less pronounced, but still very distinct. 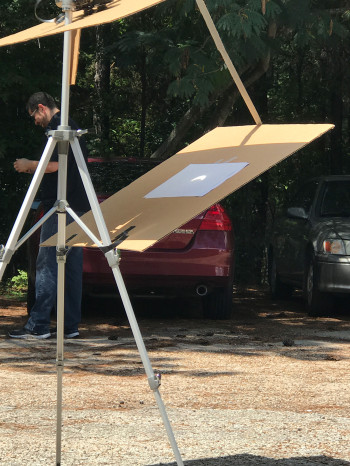 Projecting the eclipse onto paper for safe and easy viewing.

Pico’s staff also got to view the eclipse in the more traditional ways, by projecting the sun’s light onto white paper and by viewing it directly with special glasses.

The next total eclipse to be visible from the USA, in April 2024, will pass over Tyler, so we know that the team there will be ready and waiting!