Low-cost, professional-grade 6 GHz and 8.5 GHz VNAs for both lab and field use 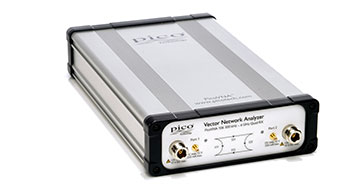 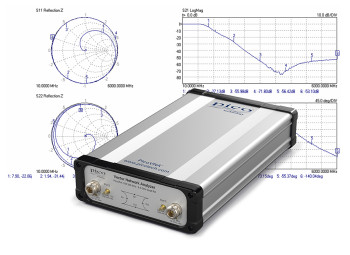 The PicoVNAs integrate a fast-stepping sine-wave signal source with a very fast-settling port transfer switch. Faster than dual-sweep competitor VNAs, within a single frequency sweep, at each frequency point, the PicoVNAs stimulate both ports in turn and twice measure phase and amplitude of incident, reflected and transmitted waves at the four receivers. This could be achieved with a degree of accuracy with a single source, a transfer switch and two receivers; the latter inputs being switched through a further pair of transfer switches. Alternatively, three receivers can be used with an additional input transfer switch. The PicoVNA, however, uses four receivers. 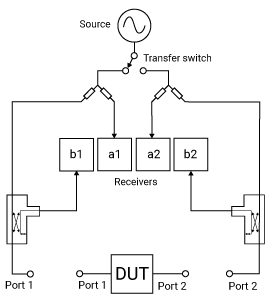 Using four receivers eliminates the receiver input transfer switch errors (chiefly leakage and crosstalk) that cannot be corrected. These residual errors are always present in two- and three-receiver architectures and lead to lower accuracy than that of the Quad RX design.

Support for 8 and 12-term calibration and the unknown thru

Almost all vector network analyzers are calibrated for twelve error sources (six for each signal direction). This is the so-called 12-term calibration, which experienced VNA users are used to performing fairly regularly. In a four-receiver design some error sources are so reduced that 8-term calibration becomes possible, along with an important and efficient calibration technique known as the unknown thru. This gives the ability to use any thru interconnect (including the DUT) during the calibration process, vastly simplifying the procedure and reducing the number of costly calibration standards that need to be maintained.

Advanced vector network analyzer users will be pleased to know that internal a-wave and b-wave data can be exported for diagnostic use. 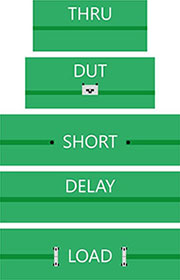 TRL and TRM (through, reflect, line and match) calibration

This is theoretically accurate because a machined air transmission line can be fabricated more precisely than a good match can be measured; certainly at higher frequencies. As this line standard can also carry the burden of time (phase) calibration, the additionally needed high-reflection standards, the shorts or opens, can also be less well known.

TRL technique requires a line length of significantly more than 0º phase delay and significantly less than 180°. Thus, a single TRL line can only address a limited frequency band. The PicoVNA 108 supports one or two TRL bands and can account for line impedance offset if required. A low-frequency TRM band can reference a readily fabricated resistive match.

TRL and TRM calibration are popular choices when measuring substrate-mounted DUTs, for example surface-mounted networks or components. The line, match and reflections (shorts and opens in the PicoVNA case) can all be readily fabricated on substrate and at precise on-substrate measurement reference planes.

Their low price makes them cost-effective as deep dynamic range scalar network analyzers or single-port vector reflectometers as well as full-function dual-port, dual-path vector network analyzers. They are affordable in the classroom, in small businesses and even in amateur workshops, yet capable of meeting the needs of all users up to the laboratory or production test technician or the metrology
expert.

Time domain reflectometry is useful in the measurement of a transmission line; in particular the distance-to-fault location of any discontinuity due to connectors, damage or design error. To achieve this, the PicoVNA software determines from its frequency domain measurements the time domain response to a step input. Using a sweep of harmonically related frequencies, an inverse fast Fourier transform of reflected frequency data (S11) gives the impulse response in the time domain. The impulse response is then integrated to give the step response. Reflected components of the step, occurring at measurable delays after excitation, indicate the type of discontinuity and (assuming a known velocity of propagation) the distance from the calibration plane.

A similar technique is used to derive a TDT (time domain transmission) signal from the transmitted signal data (S21). This can be used to measure the pulse response or transition time of amplifiers, filters and other networks.

The PicoVNA software supports Hanning and Kaiser–Bessel lowpass filtering on its time-domain IFFT conversions, preserving magnitude and phase, and achieving best resolution. A DC-coupled DUT is essential to the method. 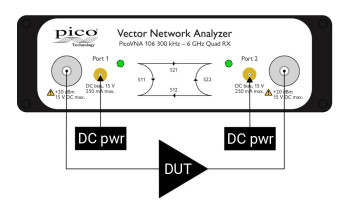 Bias-Ts are often not provided, or available as costly extras, on other VNAs. Use the PicoVNAs' built-in bias-Ts to provide a DC bias or test stimulus to active devices without the complexity and cost of external DC-blocks. The bias is supplied from external power supplies or test sources routed to the SMB connectors adjacent to each VNA port.

Save on trigger utility (PicoVNA 108 only)

Uniquely, benefiting from the fast measurement speed of the PicoVNA, save on trigger provides a fast and convenient method for capture and display of measurement data from multiple or changing device-under-test states. Think, for example, of variable attenuators, digitally configured filters, phase shifters or variable-gain amplifiers. Think also of devices under changing power supply, bias or environmental conditions, or even of a multiplexed measurement of a number of devices in the production environment. The PicoVNA can be set up to store up to 1024 triggered sweep measurements which can then be inspected, reordered and saved to disk in a number of formats. The trigger event can arrive on the external trigger input, or as a remote software trigger or a manual key press. 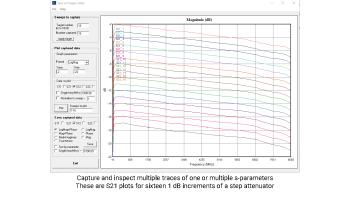 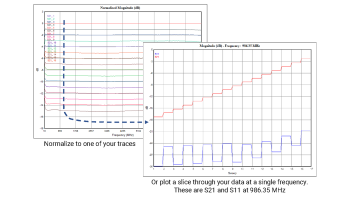 Captured measurement sweeps can be selected for display which, by default, shows one to four selected S-parameters across a maximum of 64 individually coloured traces, all plotted over the band of operation. The plotted sweeps can be any subset of all the captured sweeps and data can be normalized to one of the captured sweeps, which is useful for examining changes from sweep to sweep.

The plots to the right show S21 (magnitude and normalized magnitude in dB) for 16 states of a programmable step attenuator. The plot beneath and right plots S21 and S11 at a user-selected frequency of 986 MHz. Here the horizontal axis plots measurement sweep number, each in this case representing a unique state of the attenuator. All four S-parameters can be displayed simultaneously in this way on the graphs. Using a hardware external trigger and maximum resolution bandwidth, all the data for these plots was captured within 1 second!

The captured sweep data can be saved to disk in a number of formats, including Touchstone®, for use with third-party applications. Data can be saved grouped by s-parameter, for example. The file list on the right shows the files created for the stepping attenuator. You simply enter the name Step_Attn when saving the data, and the family of files shown is automatically created. In each of these files each column contains the S-parameter data for a given sweep. The first column after the frequency column contains data from the first sweep, the second has data from the second sweep and so on.

The data can also be saved for any single frequency within the sweep range used to capture the data. There is also an option to save the entire dataset for later use. 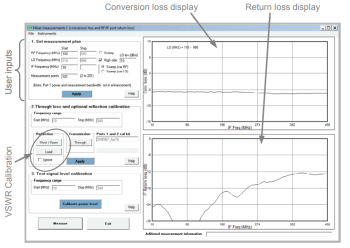 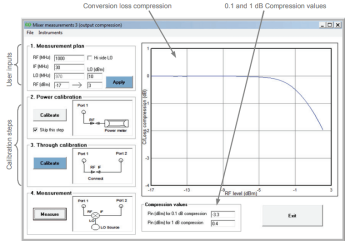 A wide range of mixer performance and port isolation measurements can be carried out, including swept RF or IF with a choice of low or high side LO. A PicoSource AS108 or a third-party signal source is used as the external LO source, and this operates under the control of the PicoVNA 3 PC application. The software also supports a third-party USB power sensor in the characterization of port power.

Contact the factory for your choice of external USB signal generator or power sensor to be considered.

Mixers can be difficult to measure accurately particularly when mixer port match is relatively poor. The PicoVNA 108 mixer measurement calibration includes the option of VSWR error correction. This reduces the conversion loss measurement uncertainty as typically shown in the diagram.

Conversion loss change as a function of the input RF level is easily determined. This can be referenced either to the port power uncertainty of the PicoVNA or the user can use a third-party power sensor (above) to pre-characterize the PicoVNA 108 port power for enhanced accuracy. The 0.1 and 1 dB compression points are displayed on completion. 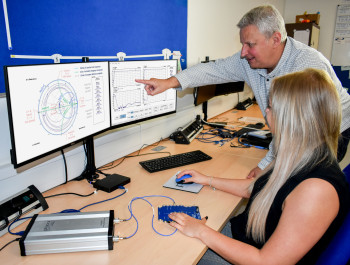 The low-cost PicoVNA 106 opens up the potential for every student or trainee to learn through the use of a full-function professional-grade vector network analyzer. The Pico PQ186 Network Metrology Training Kit builds on this opportunity and supports a wide variety of learning and experiment. Central to the kit is the separately available PQ189 Network Test PCA. This printed circuit accessory hosts a variety of example lumped element, active and passive and transmission line DUTs and end-of-line SOLT (short, open, load and through) calibration standards.

Used with the PicoVNA 106, the kit supports teaching objectives around reflection and transmission measurements, S-parameters and other standard measurement quantities. These can be presented and interpreted as log, linear, phase, real, imaginary, polar and Smith chart formats and derived quantities group delay and time domain transmission and reflection. Additionally, by including an active broadband amplifier element (+5 V DC power required, 2.1 mm jack), nonlinear compression measurements such as P1dB and AM to PM (phase due to amplitude modulation) can be explored using the PicoVNA 106’s built-in measurement utilities.

Measurements and calibrations are made via industry-standard SMA connectors. These support measurements out to 6 GHz and the teaching of best interconnection practice and the importance of secure, repeatable and robust connections. Using the on-board calibration standards the student can practice calibration for reflection, transmission and 8- and 12-term corrections using short-open-load and the known and unknown through methods. 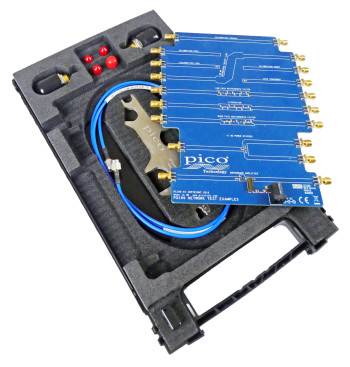 Also included in the kit is a set of budget SMA(f) SOLT calibration standards (PQ190). With these the student can calibrate at cable ends rather than on board. This supports teaching and experiment around reference plane shift, normalization and the de‑embedding of feedlines and connections on the PCA. Assumed ‘ideal’ and typical calibration data for these standards can be downloaded from picotech.com, along with the comprehensive user’s and trainer’s guide and referenced instrument settings files. Students with access to the AWR Design Environment can also download the Microwave Office design project for the kit PCA. Pico’s Cadence AWR DE interface wizard can then import real-world measured data directly to the project to allow measurement enhanced simulation or comparison with the design simulations. Software development kit examples are also available from our GitHub pages to import and work with measured data in other CAD, test and programming environments such as MATLAB, LabVIEW, C, C#, C++ and Python.

The Pico PQ186 Network Metrology Training Kit includes N(m) to SMA(f) inter-series adaptors, SMA(m-m) test leads and fixed SMA wrenches – all that the student will need to pair with the PicoVNA 106 (or any other VNA) to begin their practical learning. Printed circuit layout of the network test PCA is generic to support modification to alternative passive network and components. 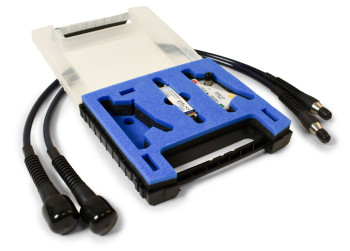 Two Network Metrology Demonstrator kits are also offered. These include Pico’s now widely respected Standard SMA or Precision PC3.5 professional grade test leads, a female SOLT calibration kit and an SMA non-insertable female to female Check Standard; both with reference data, traceable back to national standards. Either of these kits can realise and verify the full measurement capability and accuracy of the PicoVNA 106. High-quality, low-uncertainty measurements can then be made, suiting this training investment to much wider application within research and doctorate projects. Accurate measurement can also establish accurate reference and error terms in the measurements that students are making when using the PQ186 Training kit.