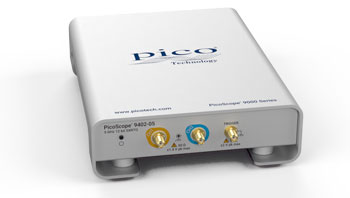 Real-time oscilloscopes (RTOs) are designed with a high enough sampling rate to capture a transient, non-repetitive signal with the instrument’s specified analog bandwidth. This will reveal a minimum width impulse, but is far from satisfactory in revealing its shape, let alone measurements and characterization. Typical high-bandwidth RTOs exceed this sampling rate by perhaps a factor of two, achieving up to four samples per cycle, or three samples in a minimum-width impulse. 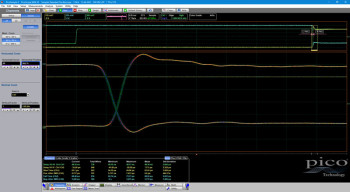 For signals close to or above the RTO’s Nyquist limit, many RTOs can switch to a mode called random sampling. In this mode the scope collects as many samples as it can for each of many trigger events, each trigger contributing more and more samples and detail in a reconstructed waveform. Critical to alignment of these samples is a separate and precise measurement of time between each trigger and the next occurring sample clock.

This technique relies on a random relationship between trigger events and the sampling clock, and can only be used for repetitive signals – those with relatively stable waveshape around the trigger event. 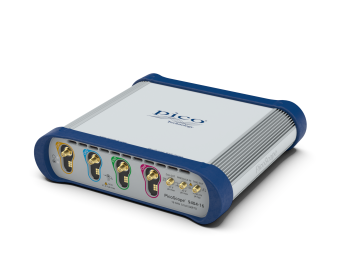 The maximum effective sampling rate of the PicoScope 9400 16 GHz models is 2.5 TS/s, with a timing resolution of 0.4 ps, which is 5000 times higher than the scope's actual sampling rate.

With an analog bandwidth of up to 16 GHz, these SXRTOs would require a sampling rate exceeeding 32 GS/s to meet Nyquist's criterion and somewhat more than this (perhaps 80 GS/s) to reveal wave and pulse shapes.

Using random sampling, the 16 GHz models give us 156 sample points in a single cycle at the scope's rated bandwidth or a generous 55 samples between 10% and 90% of its fastest transition time.

So is the SXRTO a sampling scope?

All this talk of sampling rates and sampling modes may suggest that the SXRTO is a type of sampling scope, but this is not the case. The name sampling scope, by convention, refers to a different kind of instrument. A sampling scope uses a programmable delay generator to take samples at regular intervals after each trigger event. The technique is called sequential equivalent-time sampling and is the principle behind the PicoScope 9300 Series sampling scopes. These scopes can achieve very high effective sampling rates but have two main drawbacks: they cannot capture data before the trigger event, and they require a separate trigger signal – either from an external source or from a built-in clock-recovery module.

We’ve compiled a table to show the differences between the types of scopes mentioned on this page. The example products are all compact, 4-channel, USB PicoScopes.

* Higher-bandwidth real-time oscilloscopes are available from other manufacturers. For example, a 16 GHz analog bandwidth, 80 GS/s, 8 bit sampling model is available for a $119,500 starting price.