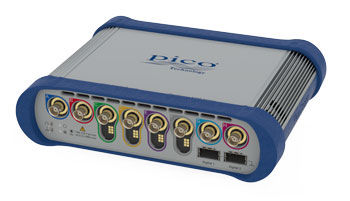 Pico FlexRes flexible-resolution oscilloscopes allow you to reconfigure the scope hardware to optimize either the sampling rate or the resolution.

Whether you’re capturing and decoding fast digital signals or looking for distortion in sensitive analog signals, FlexRes oscilloscopes are the answer.

Resolution enhancement - a digital signal processing technique built into PicoScope software can further increase the effective vertical resolution of the scope to 16 bits.

FlexRes - how we do it

Most digital oscilloscopes gain their high sampling rates by interleaving multiple 8-bit ADCs. This interleaving process introduces errors that always make the dynamic performance worse than that of the individual ADC cores.

The FlexRes architecture employs multiple high-resolution ADCs at the input channels in different time-interleaved and parallel combinations to optimize, for example, the sampling rate to 5 GS/s at 8 bits or the resolution to 12 bits at 1.25 GS/s.

For simplicity, the diagram shows one bank of four channels; the 8-channel PicoScope 6824E has two banks. The 4-channel FlexRes models use one quad-ADC chip for each pair of analog channels.

Coupled with high signal-to-noise ratio amplifiers and a low-noise system architecture, FlexRes technology can capture and display signals up to 1 GHz with a high sampling rate, or lower-speed signals with 16 times more resolution than typical 8-bit oscilloscopes.

The PicoScope software lets you choose between setting the resolution manually and leaving the scope in auto resolution mode, where the optimal resolution is used for the chosen settings. 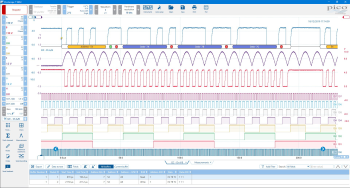 When fitted with optional 8-channel TA369 MSO pods, the PicoScope 6000E Series adds up to 16 high-performance digital channels to up to eight analog channels, enabling you to accurately time-correlate analog and digital channels. Digital channel bandwidth is 500 MHz, equivalent to 1 Gb/s, and the input capacitance of only 3.5 pF minimizes loading on the device under test.

Digital channels, captured from either parallel or multiple serial buses, may be grouped and displayed as a bus, with each bus value displayed in hex, binary or decimal, or as a level (for DAC testing). You can set advanced triggers across the analog and digital channels.

The digital inputs also bring extra power to the serial decoding feature. You can decode serial data on all analog and digital channels simultaneously, giving you up to 24 channels of data – for example, decoding multiple SPI, I²C, CAN bus, LIN bus and FlexRay signals all at the same time!

With an intelligent probe interface on channels C to F on 8-channel models and all channels on 4-channel models, the PicoScope 6000E Series supports innovative active probes with a low-profile mechanical design for ease of connectivity and low loading of the device under test.

With PicoScope, when you probe a circuit, you can trust in the waveform you see on the screen. 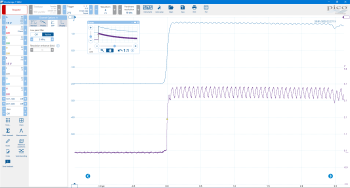 With their 12-bit resolution, the PicoScope 6824E, 6424E, 6425E and 6426E can display low-level signals at high zoom factors. This allows you to view and measure features such as noise and ripple superimposed on larger DC or low-frequency voltages.

Additionally, you can use the lowpass filtering controls on each channel independently, to hide noise and reveal the underlying signal.

Total cost of ownership of a PicoScope 6000E is lower than traditional benchtop instruments for several reasons: 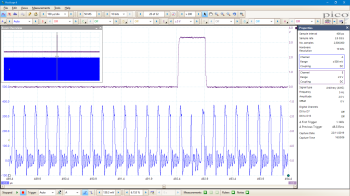 PicoScope 6000E Series oscilloscopes have waveform capture memories of up to 4 gigasamples – many times larger than competing scopes. Deep memory enables the capture of long-duration waveforms at maximum sampling speed. In fact, the PicoScope 6000E Series can capture waveforms 200 ms long with 200 ps resolution. In contrast, the same 200 ms waveform captured by an oscilloscope with a 10 megasample memory would have just 20 ns resolution. The scope automatically shares the capture memory between the analog channels and MSO ports you have enabled.

Deep memory is invaluable when you need to capture fast serial data with long gaps between packets, or nanosecond laser pulses spaced milliseconds apart, for example. It can be useful in other ways too: PicoScope lets you divide the capture memory into a number of segments, up to 10 000. You can set up a trigger condition to store a separate capture in each segment, with as little as 300 ns dead time between captures. Once you have acquired the data, you can step through the memory one segment at a time until you find the event you are looking for.

Powerful tools are included to allow you to manage and examine all of this data. As well as functions such as mask limit testing and color persistence mode, PicoScope software enables you to zoom into your waveform up to 100 million times. The Zoom Overview window allows you to easily control the size and location of the zoom area. Other tools, such as the waveform buffer, serial decoding and hardware acceleration work with the deep memory, making the PicoScope 6000E Series some of the most powerful oscilloscopes on the market 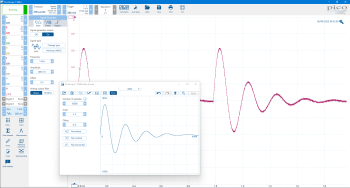 The PicoScope 6000E scopes have a built-in 50 MHz function (sine and square wave) generator, with triangle, DC level, white noise, PRBS and other waveforms possible at lower frequencies. As well as basic controls to set level, offset and frequency, more advanced controls allow you to sweep over a range of frequencies. Combined with the spectrum peak hold option, this makes a powerful tool for testing amplifier and filter responses.

Trigger tools allow one or more cycles of a waveform to be output when various conditions are met, such as the scope triggering or a mask limit test failing.

All models include a 14-bit 200 MS/s arbitrary waveform generator (AWG). This has a variable sample clock, which avoids the jitter on waveform edges seen with fixed-clock generators and allows generation of accurate frequencies down to 100 µHz. AWG waveforms can be created or edited using the built-in editor, imported from oscilloscope traces, loaded from a spreadsheet or exported to a CSV file.

More information on the arbitrary waveform and function generator >> 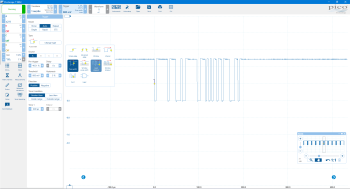 Many digital oscilloscopes still use an analog trigger architecture based on comparators. This causes time and amplitude errors that cannot always be calibrated out and often limits the trigger sensitivity at high bandwidths.

In 1991 Pico pioneered the use of fully digital triggering using the actual digitized data. This technique reduces trigger errors and allows our oscilloscopes to trigger on the smallest signals, even at the full bandwidth. Trigger levels and hysteresis can be set with high precision and resolution. 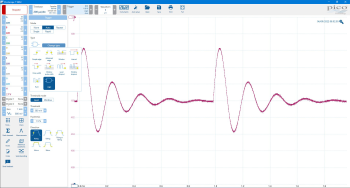 The digital trigger available during MSO operation allows you to trigger the scope when any or all of the 16 digital inputs match a user-defined pattern. You can specify a condition for each channel individually, or set up a pattern for all channels at once using a hexadecimal or binary value.

You can also use the logic trigger to combine the digital trigger with an edge or window trigger on any of the analog inputs, for example to trigger on data values in a clocked parallel bus.

Some oscilloscopes struggle when you enable deep memory; the screen update rate slows and the controls become unresponsive. The PicoScope 6000E Series avoids this limitation with the use of a dedicated fourth-generation hardware acceleration (HAL4) engine inside the oscilloscope.

Its massively parallel design effectively creates the waveform image to be displayed on the PC screen and allows the continuous capture and display to the screen of 2.5 billion samples every second.

The hardware acceleration engine eliminates any concerns about the USB connection or PC processor performance being a bottleneck.

The PicoScope 6000E Series features hardware-based trigger time-stamping. Each waveform can be time-stamped with the time in sample intervals from the previous waveform.

Fast trigger rearm times are possible down to 300 ns (typical). 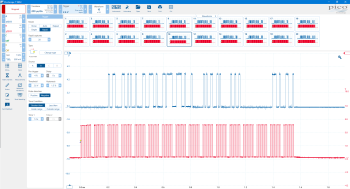