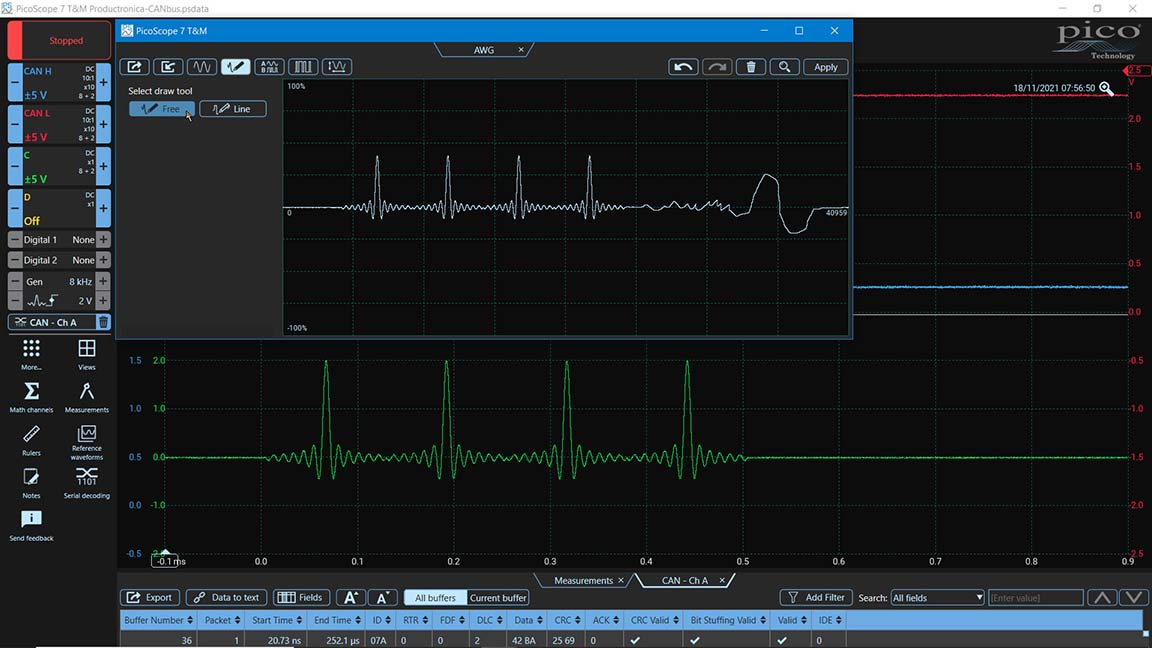 In our most recent release of PicoScope 7 T&M Early Access 7.0.90 last week, our development team reached a significant milestone: the completion of the Signal Generator / AWG editor function.

Most T&M PicoScope models are equipped with a Signal Generator that can deliver Sine, Square, Triangle, Ramp, Sin(x)/x, Gaussian, Half sine, White noise and PRBS waveforms. This is complemented with a sweep function that enables device testing to be performed over a predefined frequency range; this is perfect for testing filters, operational amplifiers, etc., over their specified operating range.

More complex devices need to be tested using real-world waveforms, which is where an AWG (Arbitrary Waveform Generator) comes in handy. Many PicoScopes include an AWG, which can now be fully controlled from within the PicoScope 7 user interface.

Real-world waveforms captured with a PicoScope can be loaded into the AWG memory and replayed as needed for device testing and performance verification. Imagine, for example, a staged car crash with sensors set to record the impact characteristics. It's an expensive test, and so it's something that you would only want to do once. But with the waveforms saved, they can subsequently be replayed as often as needed with the PicoScope AWG in order to aid development of an airbag deployment system and other safety-related systems.

Furthermore, the original waveform can be modified with the AWG editor to stress the device under test, in order to see how it behaves at the extremes of its specification, and with 'known good' and 'known bad' signals for Go/No go testing.

Other elements of the PicoScope 7 project are close to completion, so we'll report on those as each one crosses the line. 2022 is an exciting time as the development team work towards completion of the 'full function' release of the software.