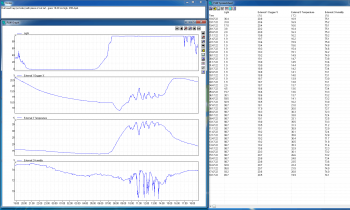 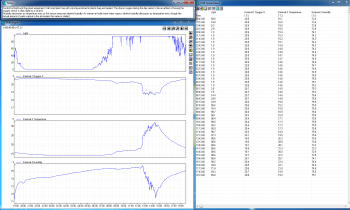 This experiment was run over 24 hours, starting just before 19:00 in the evening at the end of April. Sunset was given as 20:18. The top set of graphs clearly show that the oxygen level drops overnight in a sealed bag with a tray of growing grass turf. Light is shown in the top graph. Oxygen levels rose a few hours after sunrise, and showed an upward trend, until starting to drop again as light levels began to fade. The humidity graph is rather more complicated, showing a gradual drop at night followed by sharp dips. There were water droplets condensing on the plastic bag during the day, which presumably explain the sharp dips. DrDAQ measures relative humidity, so it is to be expected that this will fall as the temperature rises, as warm air will hold more water vapour. The high temperatures during the day can be attributed to light falling directly onto the sensors. The room temperature was 20°C rather than 30°C.

The change in the oxygen level may not seem very large, but the lowest level of 17.9% is considered to be very oxygen deficient. The oxygen content of air is about 20.9%, and safety monitors are generally set to respond at 20.5% oxygen. Below 18% is considered hazardous.

A control experiment was run over the same time frame a day later, with damp soil in the same tray, and no grass. This showed a drop in humidity as the temperature rose (see above for comment on relative humidity). The oxygen level also dropped as the light level and temperature rose, and then returned to nearly the original level as the temperature and light levels fell in the evening. There is no obvious reason for this change in oxygen level, but it was much smaller and showed an opposing trend to the experiment with the growing grass. It may have been an artefact of having the oxygen sensor in direct light.

This experiment should be considered with decomposition to explain why mature plant systems have no net oxygen or carbon dioxide emission to the atmosphere.

This experiment can be carried out with a pot plant, but better results were obtained with a piece of overgrown turf.  The setup must be right by a window, and carried out between April and September when plants are actively growing. Low night-time temperatures outside were not a problem in an insulated building.

Look at the combined heat and power system used to grow tomatoes by a nursery near a giant sugar refinery, described at britishsugar.co.uk/tomatoes.aspx. As well as using waste heat, carbon dioxide is pumped into the greenhouses to boost plant growth. .

This experiment was written by Susan Hammond of Woking College.