Observing the switching on and off of a filament lamp: results

Because of the high sampling rate a large file of data was accumulated. The data was copied as text and imported into Excel. Using this table of data, a suitable portion was selected for graphing.

The following graph shows the plot for the complete data set.

The following graph shows the period immediately after the application of a p.d. across the lamp.

The instant that the p.d. was applied can be clearly seen. What is also very clear is that the lamp takes some 150 ms to reach maximum brightness.

A 5.1 ohm resistor was placed in series with the 6 volt lamp. The voltage input of DrDAQ was connected across the resistor.

The supply voltage was set to 9 volts. This was checked with a digital multimeter and found to be 9.42 volts. The value remained constant during both switching on and off.

This arrangement allowed the current flowing to be calculated, by application of Ohm's law to the data collected across the resistor.

The correlation between lamp brightness and its resistance is shown in the following graph: 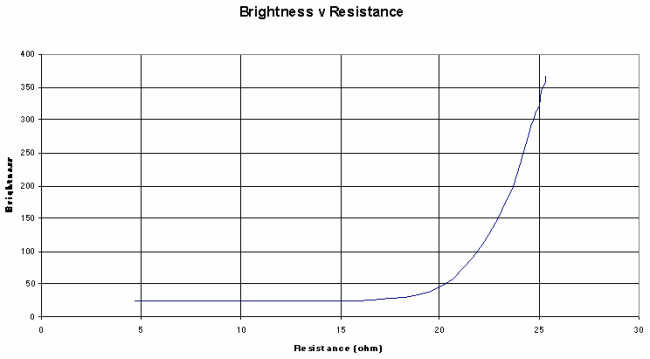 Bearing in mind that mains AC has a frequency of 50 Hz (in the UK), and this slow response to changing p.d. is likely to reduce any effect of flicker.

Until the lamp filament reaches a high enough temperature it will not emit any light. Consequently, although its temperature, and hence resistance, increases there is no change in levels of illumination.

The lamp will be emitting infrared radiation before any light is emitted. Detectors capable of responding to both infrared and light would therefore extend the range.

The original display also shows what happens during lamp switch off. It can be seen that some 180 ms elapses before the emission of light ceases.

This might be the time that it takes the filament to cool down.

Another explanantion might be the electromagnetic induction. At the moment of switch off, the magnetic field generated within the coiled filament, will begin to colapse. According to Lenz's law this will induce an emf in the opposition to the dropping emf. What is observed is certainly opposing the switch off. As can be seen, the emf does not drop instantaneously to zero.

As far as switch-off is concerned the p.d. is supposed to drop to zero [a back-emf possibly preventing this happening instantaneously]. Hence the actual applied p.d. is unknown during this time. Therefore cannot find either p.d. across the lamp or its resistance.

The two period cannot be compared:

The difference between these two times is seen from the curves:

This is perhaps more clearly seen in the screen shot below: 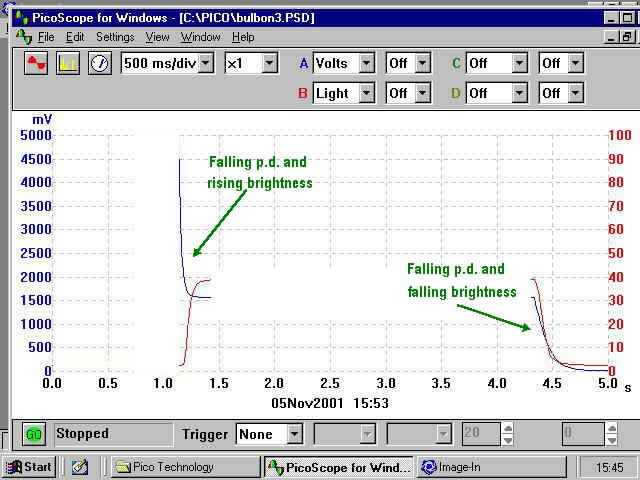