A typical trace is shown below. 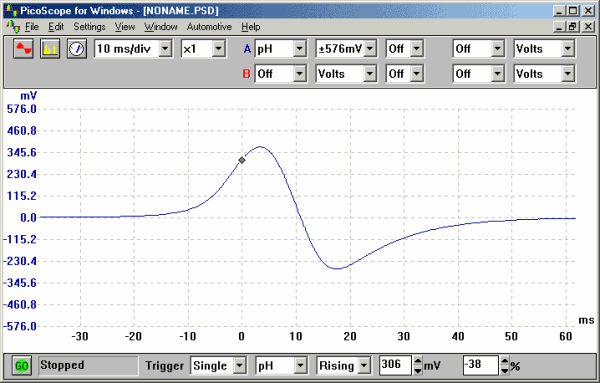 Q1. Why are both negative and positive voltages generated as the magnet passes through the coil?

A1. Depending on which pole of the magnet enters the coil first (and how the coil is connected to the ADC), either a positive or negative pulse is produced. As the magnet travels through the coil, the trailing pole will cause the electrons inside the coil to reverse direction, thus causing the current to reverse (see diagram).

Q2. Why does the width (duration) of the pulse vary as the coil is moved up and down the tube?

A2. By varying the distance between the top of the tube and the coil, the speed of passage of the magnet through the coil is varied, which varies the output from the coil.

From this it can be seen that varying the distance between the top of the tube and the coil (as in equation 1), the velocity of the magnet will change.

To create the display below we dropped the magnet from several different heights and used PicoScope’s composite view function. 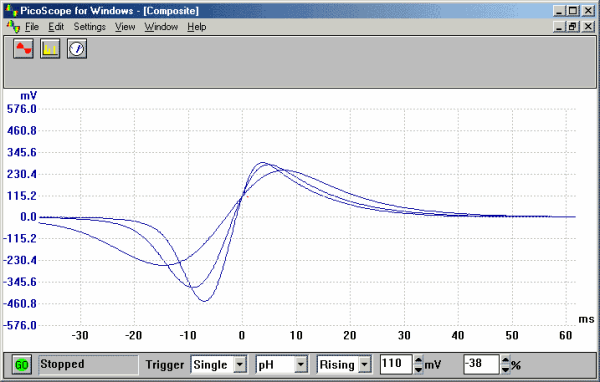 Q3. What is the relationship between the speed of the magnet, as it travels through the coil, and the amplitude of the voltage produced from the coil?

A3. If a magnet is passed through a coil of wire, a current is induced in the coil. The strength and the speed of the magnet will determine the size of the current as it passes through the coil.

The strength or magnitude of the induced current is governed by Faraday’s Second Law:

The magnitude of an induced E.M.F. is proportional to the rate of change of magnetic flux linkage.

This means that the stronger the magnet, and the greater the speed of the magnet as it travels through the coil, the larger the current produced from the coil. Again, the graph above demonstrates this well.

Q4. What happens to the speed of the magnet as it passes through the coil?

The direction of an induced current (if one were to flow) is such that its effect would oppose the change in magnetic flux which gave rise to the current.

In effect, we are converting the kinetic energy of the magnet into electrical energy in the coil, and by doing so the magnet’s acceleration decreases.

The experiment is quick to set up and produces reliable results.

If you only have access to one PC-based oscilloscope, an alternative approach would be to have the pupils design and make their own coils. Each coil could then be tested to see which produced the biggest amplitude.

This experiment was written by Pico Technology. If you have any comments about this experiment or suggestions for improvements please contact us.