PicoLog 6.1.16 is released with the following new features:

The following bugs have been fixed: 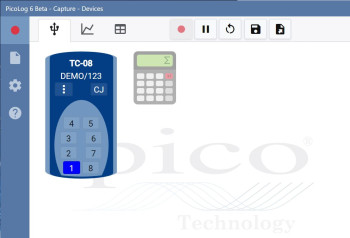 You spoke, we listened!

We changed the UI buttons to controls that allow starting, pausing and resetting a capture. It was felt the trash can icon and dialogues warning of "deleting data" was misleading. Now the current capture or configuration is "reset", the icon has changed from a trash can to a circular reset icon. 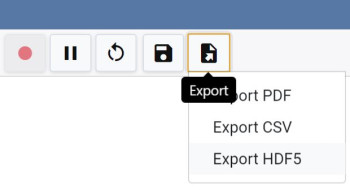 We’ve added another new feature requested by our PicoLog customers!

PicoLog 6 users requested a way to export raw uncompressed data to applications such as MATLAB for post-capture data analysis. The problem was finding the right file format for PicoLog 6, with support for capturing from up to 20 simultaneous devices or 360 simultaneous channels, at a capture rate of 1 kS/s per channel, it is capable of capturing very large datasets and filling up large hard drives in a matter of days.

We chose the HDF5 file format, or Hierarchical Data Format 5, which is designed to store and organise “Big data”, available under a BSD type license for general use. The freely available HDF distribution consists of the library, command-line utilities, test suite source, Java interface, and the Java-based HDF Viewer (HDFView).

PicoLog 6 can now export in this efficient raw binary format for uses to transport large data sets from PicoLog to their 3rd party application. We’ve produced to examples with videos to demonstrate importing a PicoLog capture using Python and one with MATLAB also.

Just some under-the-hood upgrades that make the PicoLog user experience a better one.

PicoLog now continues capturing during the saving of a .picolog file (beta)

With all the performance improvements for PicoLog 6 and faster PCs, PicoLog can now save .picolog files without stopping the capture. However, we can't guarantee the odd dropped sample on very large captures, or with slower machines such as Raspberry Pi. During testing, Raspberry Pi 4B with 2GB RAM dropped one sample during a .picolog file save. This is mainly due to the slower disk I/O on a Pi SD CARD.