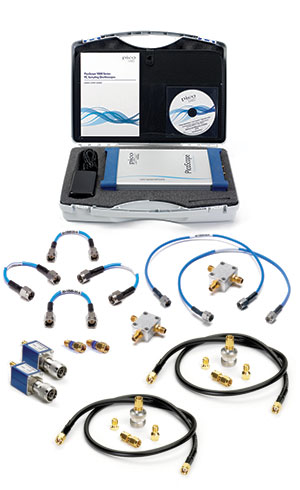 The PicoScope 9200 and 9300 Series are leading-edge product families resulting from the same long and continuing program of product development. The PicoScope 9300 Series shares many features with the 9200 Series but has updated hardware and software. In this comparison of the two families we will go beyond the headline specifications to consider which model is suited to your application. The discussion includes the recently introduced PicoSource PG900 fast pulse generators, which use the same fast pulse technology found in the 9300 Series sampling oscilloscopes.

Leaving aside parameter specifications for a moment, you first need to decide on the hardware configuration—the combination of input and output channels—that best suits your requirements.

Table 1 – Selection of model or configuration

The bandwidth of your oscilloscope must be large enough for the signal speed or bandwidth (related to its frequency, data rate or transition time). Higher-bandwidth instruments also have faster triggers, shorter sampling interval (time resolution) and lower timing jitter. These parameters may determine your choice of oscilloscope family.

When working with data streams, the data clock is often not available. This is particularly common when working with serial data from an optical fiber, but also with many high-speed electrical data-only streams where clock recovery is used to eliminate clock-to-data skew or accumulated jitter. It is therefore usual to find a clock-recovered trigger capability provided with broadband oscilloscopes, and in the PicoScope 9000 Series this is offered on the models below.

When considering serial data applications, you may need to consider pattern sync (or trigger divide by n) capability. By counting and subdividing trigger rate, a sampling oscilloscope can synchronize to and create a stable display of a serial data pattern. You can then search the whole pattern for data or eye corruption using the eye line feature. The maximum rate and count length over which this can be achieved may also be important. Pattern sync is available on all PicoScope 9200 and 9300 models

A sampling oscilloscope does not have the switched voltage ranges seen on a real-time oscilloscope. Instead it has a single fixed voltage range and a high-resolution analog-to-digital converter (16-bit in the PicoScope 9200 and 9300 Series). Full-scale range is ±1 V DC or AC peak. The converted signal is digitally scaled to achieve all other voltage ranges. Note that even at ±4 mV (1 mV/div), 8 ADC bits remain available.

A sampling oscilloscope (in its sequential sampling mode) gathers only one trace sample for each trigger event. It is therefore essential that it triggers, stores and rearms as fast as possible. In this respect the 9200 Series is typical amongst sampling oscilloscopes, while the PicoScope 9300 Series with its ARM processor and SPARTAN-6 FPGA stands out as one of the fastest available. Traces, eyes, graded persistence displays, measurements and statistical assessments are all as fast as they come on the 9300 Series!

Thanks to the faster sampling in the PicoScope 9300 Series, trace length can realistically be increased to an industry-leading 32k samples. This improves view and zoom detail, measurement resolution and resolution of mathematical functions such as FFT, and more closely matches the available vertical and horizontal resolutions. Additionally, both series can take full advantage of a connected HD display size and resolution and can even stretch this waveform and persisted display detail (16 bits and 32k samples) across multiple monitors.

A sampling oscilloscope has no input amplification. Despite this, noise is still present in the system and limits the smallest signals that are viewable. The PicoScope 9300 Series front end is quieter than the 9200 Series but has greater bandwidth. In practice, the minimum viewable signal level is similar at similar degrees of averaging. However, the faster PicoScope 9300 Series can average more deeply while achieving a similar update rate.

The bandwidth of the optical-to-electrical converter (and any trigger or clock recovery pick-off applied) limits the bandwidth and data rate of any optically derived signal, as can be seen in the table below. Maximum clock recovery rate, pattern sync and trigger rate and their pick-off bandwidths may also need to be considered.

A further consideration is that optical-to-electrical receivers (and their transmitter counterparts) tend to distort the data eye, mainly because of their asymmetric transition times. Receivers, including the PicoScope 9000 Series sampling oscilloscopes, are provided with electrical lowpass filters to correct the eye at particular data rates. Typically these have a –3 dB cut-off of 0.75 x data rate, and oscilloscope bandwidth needs to be higher, about equal to the data rate. Please contact Pico Technology technical support if a particular data rate does not appear to be covered by the accessory filters listed for these products.

Time domain transmission and reflectometry both apply a fast-edge pulse to an unknown single or multi-port network. This could be an electrical component, a cable, or a signal receive or transmit port. By measuring the pulse that reflects back (TDR) or the pulse that passes through (TDT), the transmission characteristic or mismatch can be analyzed.

Scalar or vector network analyzers perform a similar function to TDR/TDT analyzers but use a frequency-domain instead of a time-domain technique. These instruments inject and measure a sine wave, one frequency at a time. TDR/TDT instruments inject a fast pulse containing a wide spectrum of frequencies all at once.

TDR/TDT analysis tends to be faster, while scalar or vector analysis tends to have more dynamic range. Results, for essentially the same measurement, can be converted between the two domains. Time-domain measurements are particularly effective at determining the physical location of a mismatch, fault or component. Physical distance is obtained simply by multiplying the timing of a reflection by its propagation velocity (close to the speed of light, c). Vector quantities such as s-parameters can theoretically be extracted from both techniques, but presently the PicoScope 9200 and 9300 Series extract only scalar quantities.

System bandwidth or, more accurately, system transition time (that of the fast pulse, combined with that of the sampling oscilloscope and any interconnect) determines the time resolution and hence the physical distance that can be resolved. To resolve the magnitude of a mismatch, a complete rise time and fall time are needed to cleanly define a pulse amplitude. When detecting the presence or location of a mismatch, distance resolution can be around five times better than this. Resolution quantities given below assume typical PCB or coax propagation velocity of around 0.7 c.

Available pulse amplitude and variability of pulse amplitude can both be considerations, but not as significant as you might think. Usable pulse amplitude is limited in practice to the peak full-scale voltage that the oscilloscope can accept: in these instruments, 1 V pk from an open-circuit reflection or unimpeded transmission path. The benefit of large amplitude at the source (as with the PicoScope 9311) is that the test system source match can be improved when using an attenuator. Variable amplitude gives the opportunity to optimize signal level and thus dynamic range in any TDT/TDR measurement, and possibly reduce amplitude to keep within its device-under-test limits or, in the case of an active device, explore its nonlinearity.

Pulse distortions or aberrations at the pulse source or at the receiving oscilloscope and interconnect are not of primary importance in a TDT/TDR application because they are corrected by system port calibration into known short, open and load.

As a third configuration option, the TDR/TDT generator can be separated from the oscilloscope. There is a choice of three generators from the PicoSource PG900 family with either SRD or TD generation, or both. These offer the flexibility of separately located transmit and receive TDT as well as stand-alone use. The PicoSource PG900 Series generators are compatible with all models in the PicoScope 9300 series, allowing for instance the combination of TDR/TDT with optical, clock recovery or four-channel capability.

TDR/TDT functionality is substantially enhanced in the PicoSample 3 software supplied with the PicoScope 9300 Series. As noted in the table above, differential TDR/TDT is supported, with full correction for differential coaxial (twinaxial) cable, and for parallel or twisted lines where no ground is present.

The 9300 Series are slightly longer and slightly heavier than the 9200 Series: