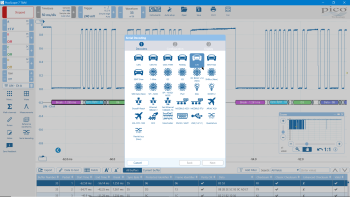 The growing number of convenience and comfort features in vehicles, coupled with the desire to eliminate point-to-point wiring harnesses associated with non-critical features such as wipers, mirrors, climate control and rain sensors, led to the demand for lower-cost alternatives to CAN for sensor and actuator applications. LIN (Local Interconnect Network) was developed to provide a common sensor/actuator bus standard. Initially introduced in 2000 as an inexpensive serial communication bus, the latest version (2.2A) is now standardized as ISO 17987. LIN uses a simple and low-cost single wire physical layer implementation based on ISO 9141 (as used by the K-line onboard diagnostic standard). This single-wire implementation does make LIN more susceptible to EMC than two-wire buses, which in turn limits the data rate to 20 kb/s and the recommended number of nodes to 16.

Although the LIN schedule makes the communication cycle rigid, the standard accommodates flexibility by allowing five different frame types: unconditional, event-triggered, sporadic, diagnostic and user-defined. The last two types are application-specific and the first three are used for regular communication, with unconditional frames being the normal method of communication. To minimize energy consumption, LIN offers capabilities to send Slave nodes into a sleep mode and wake them up as required. LIN has rapidly become a very successful standard for simple low-cost data communications within non-critical body and convenience/comfort applications and is now very widely deployed in production vehicles.