This experiment uses a PC oscilloscope to investigate the effect of wind resistance on a rotating system, the electrical output from a coupled generator and the onset of terminal velocity. The energy input to the system is from a falling load and the energy output from a motor/generator is monitored by the PC oscilloscope as a measure of the wind resistance affecting the load’s fall.

Ready-made apparatus is manufactured by Lascells Ltd and is available as products 230-114 and 230-115 from Technology Supplies Ltd. Phoenix House, Tern Hill, Market Drayton, Shropshire. Tel. 01630 637300. Alternatively, a system can be consrtucted from Lego etc. PC oscilloscopes can be bought from Pico Technology. 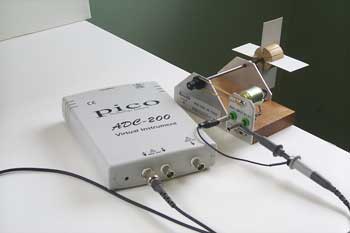 Support the windmill/generator unit at the edge of a bench so that a weight attached to the thread is free to fall to the floor when released.

No vanes are fitted to the windmill for the first run.

The PC oscilloscope settings are typically:

Allow the load to fall from rest to the floor and save the trace on the PC oscilloscope as WIND1.

Repeat the experiment using two vanes each measuring approximately 40 x 30 mm. Record the trace on the PC oscilloscope as WIND2.

Repeat the experiment using 4 and then 6 vanes recording the traces on the PC oscilloscope as WIND3 and WIND4.

Small d.c. electric motors generate electricity when the shaft is mechanically rotated, i.e. they act as a generator. Their output is basically d.c. with an a.c. oscillation superimposed.

Why does the output from the generator increase with time in each PC oscilloscope trace? Which law of electromagnetism?

Does the a.c. period on the PC oscilloscope trace remain constant or change with time? Explain your observation.

Does the average output from the generator (the d.c. component) increase linearly with time? (i.e. can you draw a straight line with a ruler through the trace?) What does this tell you about the speed of the falling weight?

How does the maximum output value reached compare in each of the PC oscilloscope traces as more vanes are fitted? What does this tell you about the maximum speed reached by the falling weight?

In the PC oscilloscope traces with vanes fitted, the output increases and then maintains a steady value. Describe the motion of the falling weight during the time of descent.
What is the name given to this final motion?

The PC oscilloscope traces enable you to deduce how long it takes to attain a constant output value. How does this time vary with number of vanes?

If we take two vanes as the starting, reference point you can see whether adding a further 4 vanes of the same size (6 vanes in total) reduces the output by twice as much as the reduction caused by adding 2 more vanes (4 in total).

Does the effect continue as we increase the number up to a maximum of 12?

Is the effect of adding 4 more vanes the same as adding just 2 more vanes but of twice the area?

Do the vanes of a given area produce the same effect when used in different orientations?

For, say, 6 vanes what would you predict the effect to be of doubling the weight on the thread? What do you think the effect would be on: