Experiments with a thermoelectric generator

Almost every scientist will have used a thermocouple as a sensor for measuring temperature. A typical arrangement consists of two junctions with wires of dissimilar metals as shown in Figure 1.

Figure 1: a temperature sensor - if T1 is fixed then T2 is determined from the voltage

In 1821 Thomas Seebeck found that an electric current would flow continuously in a closed circuit made up of two dissimilar metals if the junctions of the metals were maintained at two different temperatures. This has become known as the Seebeck effects and from this it is seen that the voltage generated is dependent on the chosen metals A and B and the temperature difference giving:

where SA and SB are Seebeck coefficients

Calibration tables exist for common thermocouple materials and, in many cases, integrated circuits have been employed to amplify and linearize the output as millivolts per degree. Semiconductors show much larger thermoelectric effects than do metals but, as they cannot be drawn out into wire, they must be used in blocks as illustrated below.

Figure 2: a thermoelectric generator made from n and p bismuth telluride

A device such as that shown above can be produced with many junctions which, when connected in series, gives output voltages of the order of one volt rather than the usual microvolts encountered with copper-constantan thermocouples. These experiments can be carried out with this type of thermoelectric generator.

With the topic of energy being a crucial component of most science curricula, it was considered that these experiments may contribute to a greater awareness of this important topic amongst pupils at schools and other institutes of learning.

The basic requirements for constructing a generator are a thermoelectric device and a source of heat from a hot plate. However, since any thermoelectric device is quite a good conductor of heat it is soon obvious that the temperature of the cold plate follows, closely, that of the hot plate unless heat is extracted from the cold plate. Therefore, an additional requirement is that the cold plate be mounted on a heat sink, which is usually cooled by a fan to maintain a relatively constant temperature. The experimental arrangement is shown below in Figure 3.

A convenient way to heat the top plate is to use a power transistor firmly fixed to the plate. The device used in this experiment is a p-type TIP32A though any similar transistor would be suitable. The base current of the transistor is controlled with a variable resistor (of the order of 10 kΩ) and, with the collector voltage of 12 V, the current flowing through the device can be controlled from almost 0 to 2 A thus providing a variable heating source up to approximately 20 W. Temperatures of both the hot plate and the heat sink are measured using two LM35 temperature sensors which give voltage outputs of 10 mV per °C. The photos below show the completed thermoelectric generator. 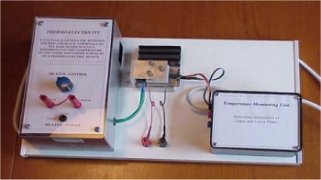 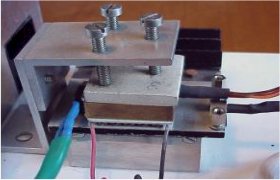 With the experiment set up as described above, use the ADC-11 data logger and PicoLog software to take recordings of the two temperature sensors together with the output voltage at one-second intervals.

Find the internal resistance of the generator by connecting a variable resistance to the terminals and recording the setting of resistance when the output voltage has been reduced to a half of the open circuit voltage.

Students may wish to extend the basic experiment with an examination of conversion efficiency (power out/power in) as the electrical input to the heater can be monitored whilst measuring the power output at its optimum value (i.e. with the load resistor equal to the internal resistance of the device).

This experiment was written by Frank Thompson of Manchester, UK.