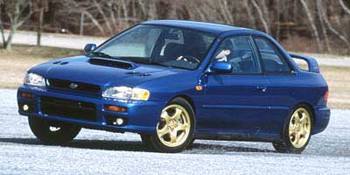 The Subaru Impreza is a World Champion car with the following specifications:

The aim of the experiment is to measure and record the speed of the car with an ADC-11. Due to budget limitations purchasing the above Subaru Impreza RS was out of the question. The only alternative was to go for the next best thing:

The Subaru challenge box set was purchased, set up and tested. After a few days of testing it was decided that the technical staff should stop playing with it and actually perform a data logging experiment. The following equipment was used:

The equipment was set up so that the cars will break the light being received by the EL031 light sensor, thus affecting the resistance and causing a larger voltage drop across it.

Note that the digital output (DO) from the ADC-11 is used to power the LED and provide the voltage across the EL031. The light sensor was setup so that it was directly in the line of the LED. It was found that better results were achieved when the light emitted from the LED was focused with the aid of a magnifying glass.The track itself was setup as an oval, with the following parts:

It would not be fair to race cars using the above sections as no cross over sections are employed so the distances that the cars have to travel to complete a lap has a difference of over half a metre. The table below shows the track used: