Aerobic respiration is the process in which glucose and oxygen, through the action of enzymes in mitochondria, produce carbon dioxide, water and lots of energy. In this experiment the use of oxygen in the aerobic respiration of peas can be seen in that, in a sealed container, the level of oxygen reduces with time. 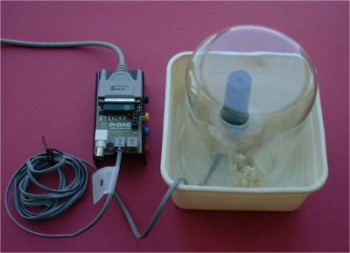 Figure 1: the equipment set up

A centrally heated and thermostatically controlled room or laboratory should not change much in temperature, probably only of the order of 2–3 °C, assuming that windows are not suddenly opened or lots of bunsen burners lit.

Ideally one would also investigate how the temperature of the peas and their environment changed as respiration took place — it should rise. However, it is difficult to design a situation in which this can be easily achieved whilst providing a sealed atmosphere environment. Probably the best that could be done would be to place the peas, oxygen and temperature sensors inside an upturned vacuum flask over water. The external temperature would beed to be monitored too. Obviously some energy will be transferred through the water seal, but a rise in temperature of the peas and their environment over the external surroundings should be noticeable.

An extension to the basic experiment could be to place the trough, beehive shelf, beakers, peas,etc into a thermostatically controlled heated water-bath, or on a hot-pate, and see if temperature affects the rate of respiration and so the speed of uptake of oxygen. Temperature up to around 40°C are OK.

A further investigation could be to see if light intensity has any effect, illuminating the peas with a light bulb and additionally recording the light level. One of the energy–saving fluorescent bulbs should be used so that little direct heating is caused. Readings should then be collected from the oxygen sensor connected to DrDAQ externally and from DrDAQ’s on-board light level sensor placed alongside.