Rainfall is measured by catching water over a given time, in a suitable jar, usually with a

funnel. The tedious part is going out and measuring the amount of water everyday. The task is to devise a way of monitoring the level of rainwater continuously without the need to go outside.

In industry there are a significant number of situations where the height or depth of a liquid is required. The most common everyday use is in the petrol tank of a car or even the cistern in a flush toilet or water tank.

Below are two methods by which the spindle of a rotary potentiometer can be used to detect movement of a float. Neither is meant to be the definitive solution. I am sure that each could be improved upon, but they do both work. 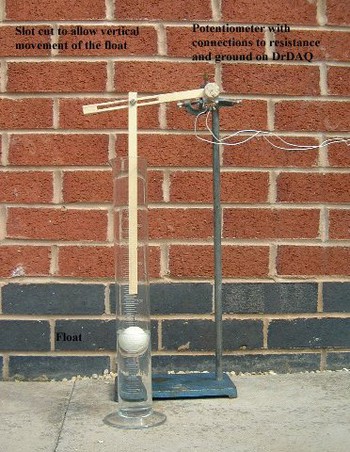 Having decided on how you are going to get the float to rotate the potentiometer spindle you then simply connect the potentiometer to the resistance and ground terminals on the DrDAQ datalogger.Turn your PC on and run the Picolog software setting it to monitor resistance over say 48 hours with a sample every 15 minutes. Note however that you will have to do some calibration so that changes in resistance monitored by the DrDAQ can be converted into millimetres of movement of the float. For example say that a 1k increase in resistance is equivalent to the float rising by 10 mm. Then by selecting the parameter setting in the Picolog software we can multiply our resistance by 10 to give us our depth of rainfall. This new data “mm of rainfall” can now be displayed in the form of a graph with axes correctly labelled.

You may be able to think of other ways of doing the job. Perhaps changes in conductance of a wire dipping into the water as the level rises the more of the wire is immersed. Or you could devise an alternative method of your own. Whatever you do make sure you calibrate your signal.

Make a report describing how your system measures the level of water. You need to describe the design decisions, and the problems they were intended to overcome. You should provide calibration charts or graphs. Comment on the resolution of the devise, how small a change in level can it detect? Are there any sources of error — particularly systematic error? Your report could discuss alternative solutions, and their advantages and disadvantages.