astronomer and discoverer of the planet Uranus, was experimenting with sunlight, a prism and a thermometer to measure the amount of heat in different colours of the spectrum. He found that the greatest temperature was reached beyond the red end of the spectrum. We now call these invisible heating rays infrared radiation. The dotted line on his graph shows the ability of the eye to discern objects in different colours.

We will repeat Herschel's experiment using a slide projector and prism to make a spectrum. A tiny thermistor will be used to sense temperature. The changing resistance of the thermistor with temperature will produce a change in voltage that will be measured by DrDAQ as we move it through the colours of the spectrum. 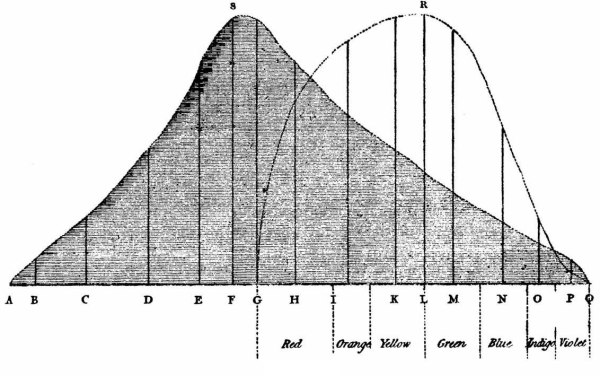 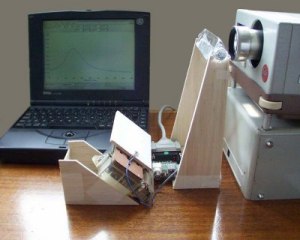 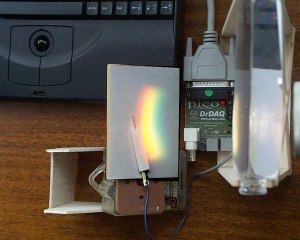 The experiment should be setup as shown in Figure 1 below.

Remove the heat absorbing glass from the projector. This is the thick, flat, greenish glass usually between the condenser lenses or between them and the slide carrier. It will probbably be held in place by a wire clip or a twisted metal tag.

Open a plastic 35 mm  slide and cut two strips of aluminium kitchen foil about 40 x 12 mm. Secure them across the opening using tiny bits of sellotape, leaving a gap of 1.5 to 2 mm  between them across the middle of the 24 x 36 mm  aperture. Reassemble the slide and insert into the projector with the slit horizontal. The projector should be set about horizontal with the centre of the lens 200 to 250 mm  above the table top.

Make a support for the prism that will hold it at the height of the centre of the projector lens, and allows you to angle the prism to get the best spectrum. My prism had a convenient round knob at each end, and I made a balsawood support.

Attach thin flexible insulated wires to the thermistor, preferably by soldering. Connect the thermistor wires to to DrDAQ terminals DO and V (it does not matter which way round).

Connect the 27 kΩ resistor to V and Gnd. (Do not connect the thermistor to DO and Gnd - it will be destroyed instantly.)

It is a good idea to set up the experiment out of drafts and sunlight or other source of radiant heat.

Set up the projector and prism as described above, and position the clock movement so that the minute hand with thermistor attached passes through the spectrum when 3 o'clock coincides with yellow.

Interpose a piece of card to block the light from the thermistor.

Run Picoscope and adjust the scale so the trace is near the bottom of the screen.

Turn the minute hand anticlockwise to say 1 o’clock well above the red.

Remove the card and observe the scope trace as the thermistor moves through the spectrum.

Make a note of the time in seconds as the thermistor reaches the centre of each colour, red, orange, yellow, green, blue, violet.

Print out the graph. Using the times you recorded subtract these times from the running time on the PicoScope graph and draw vertical lines to signify the position of the colours in the spectrum, and label or colour the areas with the appropriate colours.

Where in the spectrum is the voltage (temperature) highest?

Is there any heat beyond the violet end of the spectrum? (block the light again by interposing the card)

Compare your graph with William Herschel’s. If you found that the temperature was highest beyond the red end of the spectrum, you have rediscovered infrared radiation.

If you are lucky enough to have good sunny weather, why not try using sunlight like William Herschel? He went on to try the heating effect from other sources, an oil lamp, a black cast iron stove, etc. Herschel demonstrated that infrared could be focused by a lens in the same way as visible light. He also tried the effect of different coloured glasses, and found that some let through heat but no light. Try putting the heat absorbing glass from the projector back in the optical path. Where does the heat go?

This experiment was written by Michael Tabb - a committee member of the William Herschel Society in Bath. The society was formed to save the house in Bath where Herschel was living in 1781 when he discovered the planet Uranus with a telescope he had made to survey the entire night sky. This was the only planet to be discovered with a telescope. Before that all the planets had been known since antiquity. Neptune was discovered by mathematical calculation, confirmed by telescopic observation, Pluto again by mathematics, confirmed by photography.

King George III asked Herschel to move near to Windsor so that he could show the royal family the heavens. At Slough, he built the largest telescope in the world, laid the foundations of the science we now call cosmology, and also discovered infrared.

Herschel’s house in Bath is now a museum to his life and work as musician and astronomer. To find out more about him go to www.williamherschel.org.uk