Explore the forces that arise during a collision

This experiment uses a DrDAQ data logger to explore the forces exerted during a collision.

A small piece of doweling is inserted in the body of the dummy, and a force sensor is mounted on a barrier. The final position of the barrier has to be adjusted so that the dowel rod hits the sensor centrally 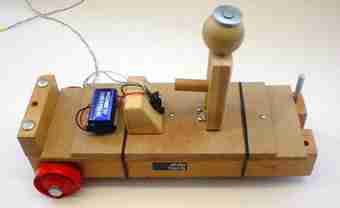 The hinged dummy mounted on a dynamics trolley is allowed to run, out of control, down an inclined track and colide with a buffer. At collision the dowel rod hits the force sensor and measures force directly and its output voltage is, over the range to approximately 15 N, directly proportional to the force applied.

What happens to the forces applied to the dummy if the mass of the trolley is increased?

What effect does a crumple zone have on the forces exerted on the dummy in a collision?