In this experiment we will learn how the observed frequencies of a sound change with:

We will use an air stream generated by a fan to simulate the conditions required to show how the observed frequency of a sound is changed by the Doppler effect.

The frequency is generated by hitting a pipe or musical instrument (triangle). Picoscope software was used to log the spectrum of the generated frequencies. The shift in frequency is observed when we perform the experiment inside the air stream generated by a fan, hit the same pipe or music instrument (inside the air stream) and compare the observed frequencies before and after the fan is switched on.

Before you perform the experiment we recommend you know the theory of Doppler effect and consider the applications of this principle (measurement of speed of cars in highways and police, velocity and expansion of universe). In this case there is no velocity for the source or the observer of the frequency, but there is a change in the velocity of the carrying air when the fan is switched on. Depending on the set up of experiment, you can observe a positive or negative change in source frequency. You can observe a positive change if the air stream comes from source frequency (it simulates source frequency speed) and a negative change when the air stream comes from the observer (it simulates DrDAQ speed or observer speed).

This experiment is suitable for children in Secondary level or High School level.

This is applied for the study of far away stars also and for the measurement velocity of fluids in pipes with out interfering the motion of studied liquids (fluid meters).

Setting up Picoscope: You should run Picoscope software and use the trigger mode for Single and Falling with 0%. Select the spectrum mode. Use the Trigger mode in high resolution (4800 frequency bands) and dB. 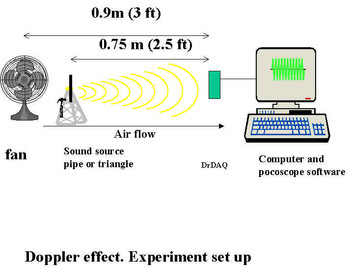 After the experiment is set up, run Picoscope in Trigger mode and spectrum. Hit the pipe with the metallic bar to take a spectrum of the generated sound. Make several runs of the same hit and check you have a repetitive spectrum and clear and strong frequencies in the range of 1800 to 2500 Hz. Mark the strongest frequency you observe in this range and save the file as

You should observe in the range of 1800 to 2500 Hz a shift in the strongest frequency of 5 to 25 Hz. This shift is the Doppler effect introduced by air stream. Take several spectrums in this conditions to observe the effect.

Questions and discussion of results.