In June 2003 as part of the European Space Agency’s

Mars Express Mission, the Mars Express orbiter, carrying the British-built lander, Beagle 2, left Earth on a Russian Soyuz–Fregat launcher. If all goes well, Beagle 2 will become the first British-built space probe to touch down on another world. [Update: the lander did successfully touch down, but then failed to deploy (BBC News 2015-01-16).]

Beagle 2, as shown in Figure 1 below, is a small space

probe — having a diameter of about that of a bicycle wheel, it is contained within a protective package to protect it during its long journey from Earth to the surface of Mars. 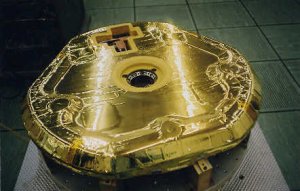 As Beagle 2 enters the Martian atmosphere a heat shield slows the descent from more than 5.5 km/s, or 12,000 mph, and prevents the overheating and burning up of the probe. A parachute aids this first task before falling away, taking a rear cover with it. The main parachute then opens and the heat shield is dropped. Nearer the surface a radar altimeter detects that the correct altitude has been reached for inflating three gas bags, these are inflated and cushion the spacecraft’s landing. Once contact has been made with the Martian surface the gas bags and parachute fall away and Beagle 2 drops a final metre to the ground.

Figure 2: Beagle 2 unfolded on the surface of Mars

Once on the surface a spring mechanism opens up the two halves of the lander, unfolding the solar panels, the various pieces of science equipment and its robot arm, as in Figure 2.

This science experiment shows the effect the gas bags will have on Beagle 2’s landing.

The Mars lander, Beagle 2, is modelled by a small cylinder of cement. On its underside is a force sensor which produces an output voltage related to the force exerted on it. The higher the force, the higher the output voltage. This sensor will be connected to a computer-based oscilloscope to show what happens to the model during its landing.

Once the model has been constructed, as shown in the technicians' notes, place the model’s suspension and connection system into a boss at the top of a tall retort stand and connect the the DrDAQ or ADC-40/42 and associated computer, as shown in Figure 3 below.

Set the Y-gain to x5

The X and Y-gains can be adjusted later if the trace does not display as you would like.

Q1. What effect does the ballon have on the shape of the trace of output voltage (force) against time?

Q2. For a very cushioned or ‘soft’ landing would you want the output voltage (force) to be high or low? Explain.

Q3. For a very cushioned or ‘soft’ landing would you want the impact time to be long or short? Explain.

Q4. What would you expect the trace to look like if you had the same balloon beneath the model but the height of fall was less? Explain.

Q5. What would you expect the trace to look like if you had the same balloon beneath the model, it was dropped from the original height, but its mass was less? Explain.

For further study repeat the experiment with the balloon attached for falls of different heights. The experiment can also be repeated using a Beagle 2 model of a different mass.