This experiment uses a circuit published on the Internet by

Charles Wenzel who has very kindly given his permission for it to be reproduced here. The circuit is not complicated to build, but does require some experience of constructing high-impedance amplifiers.

The experiment shows the variation in charge due to various effects, including approaching rain showers, thunderstorms and the effect of charged clouds passing overhead.

It will also show charge on smoke particles, and has been observed detecting the exhaust smoke from a diesel tractor working close by. This experiment doesn’t lend itself particularly well to the classroom environment as the

weather is unpredictable, but may be left running for

extended periods, and notes made of events that can be seen on the record.

The device is left running permanently in the author's radio shack, attached to a meter on the operating desk, and if interesting conditions are observed either developing outside, or if the meter is behaving ‘unusually’, then the data logger is connected, notes made, and a trace recorded. 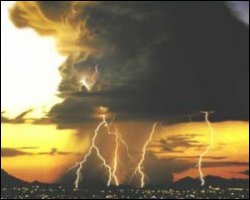 The objective of the experiment is to record and observe changes in the atmospheric charge as a result of natural and man-made events.

Firstly, the cloud charge detector circuit, as shown in Figure 3, should be built and tested. In the UK, suitable copper pads for forming the connections may be obtained from Copper Islands.

Three small modifications may be required to provide an additional output for the ADC-16 data logger, and to adapt the circuit to use it in this mode. They are: 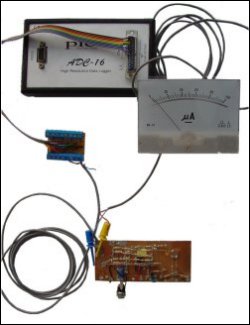 This is required and reduces the output voltage from the cloud charge detector via a resistive chain from the output to earth consisting of two resistors used as a potential divider to ensure that the voltage presented to the ADC-16 does not exceed the +2.5 volt limit.

This modification is optional and will depend on the local conditions. It comprises modification to the value of the capacitor C5 (1000 pF) in the feedback loop. This can be reduced to increase the sensitivity of the instrument. In the UK, the value of 56 pF seems to work well for the prevailing conditions, but may need to be higher in areas where thunderstorms are more frequent, or more severe.

The third modification may be required to ‘retune’ the filter on the front end to reject 50 Hz rather than the 60 Hz American mains that it is designed for.

The formula for calculating the values is :

A further modification is the attachment of a window comparator to the output of the device driving a pair of LEDs.

An LM393 may be configured using the circuit shown in the application notes, and is capable of driving a pair of high-efficiency LEDs that will indicate that the conditions are noisier than usual.

The LEDs do not provide any meaningful indication of conditions, but they will tend to draw attention to the fact that there is activity, and will also illuminate in response to spikes on the system when the spike is of too short a duration to drive the meter needle.

I have the LEDs mounted at eye level in the radio shack to draw my attention to the fact that the weather conditions might warrant me disconnecting sensitive equipment from the mains and from antennas. A piezo buzzer may also be attached to the device to provide audible ‘chirps’, but should be fitted with a switch to mute it.

The sensitivity of the device will also depend on the antenna that is used for the experiment. The article suggests using a foil ‘pie dish’ but in practice, this was found to be somewhat insensitive, so a 20 foot length of wire was taped in a square spiral to the inside of a window that had been cleaned with alcohol.

Cleaning with alcohol is essential as it removes a slightly conductive surface film that build up with time, and reduces the sensitivity of the device.

Problems have also been encountered where small spiders have anchored webs to the antenna, and in damp conditions, the web has reduced the sensitivity, presumably by providing a slightly conductive path to the local ground.

It is perfectly feasible to use an external antenna, however, extreme caution should be exercised as considerable voltages can build up even when there is no apparent electrical activity. If this approach is adopted, a neon bulb may be connected from the antenna to ground to reduce the voltage on the antenna by conducting it to ground, and to indicate that potentially dangerous voltages are present.

Connecting the antenna via a socket will permit experimentation with a variety of configurations. It also allows the antenna to be disconnected to protect the charge detecting device in stormy conditions. The device does not have robust input protection, and it is possible to exceed the limits of the device and destroy it.

In any case, the device should always be disconnected from the ADC-16 when not in use to avoid the risk of applying large voltages to the ADC-16, or the PC motherboard and causing permanent damage.

The device should be powered from a good quality stabilized supply, but can be battery driven if it is to be used in ‘the field’, or away from sources of mains power. If the supply voltage is lower than the nominal 12V suggested, it may be necessary to readjust the offset.

The device is designed to self-zero, with a long time constant, so cannot be calibrated to make absolute measurements, but will indicate short term events such as the changes associated with a distant lightning strike, or the changes that occur as a charged cloud passes overhead.

The cloud charge detector is set up, and connected to the ADC-16 as shown in Figure 1, and the parameters set as required. In quiet conditions, the output may be sampled once a second, but when conditions are more active the sample rate can be set to sample more frequently. The shortest sample that can be selected will be a function of the precision that is required.

In use, it will be noted that the meter movement acts as a low–pass filter, and conceals the magnitude of observed spikes, but short term events tend to have a relatively slow recovery, so may be observed.

There are four trends that may be observed:

1. The magnitude of the excursions.

In quiet conditions, the reading will not vary very much, and in a fairly random manner. In use, the detector set up here is centered at 750 mV, and on a quiet summer afternoon, shows a variation of up to ±50 mV.

2. The polarity of the excursion.

The detector is an inverter, so positive excursions actually indicate a negative charge, typically an impending shower will drive the meter to the left, and show a smaller value on the graph if that is being observed, rainfall will tend to drive the device the other way. Lightning strikes tend to show a positive and negative excursion.

3. The shape of events, i.e. the attack and decay times.

The attack phase is driven by the event, but the decay phase is a function of the self centering feature of the detector, unless the event drives the detector back the other way as it does when it detects lightning.

4. The general trend of the charge

During heavy rain, or hail, the meter often shows a steady increase that is sustained during the shower, only falling back to the rest position over a fairly extended period. Where the antenna is attached to a window and the face of the window pane is wet, the charge may remain for some time as the rain that is on the window will be charged. The same effect may be observed to a lesser degree on wire antennas that are out in the open.

It may be instructive to attach an oscilloscope to the output of the circuit, as there may be high frequency spikes from local sources present that lead to misleading results.

Such spikes have been observed in my radio shack, and have proved to be due to the device being in close proximity to a number of other devices, for example a cheap fluorescent light unit that seems unusually ‘noisy’, and an old PC monitor. No effort has been made to filter the output as doing so will degrade the sensitivity of the device, but it does mean that if anything meaningful is to be derived, precautions should be taken to remove, or minimise known sources of noise.

If the window comparator circuit is added, spikes will be obvious as both LEDs will light without corresponding deflection of the meter.