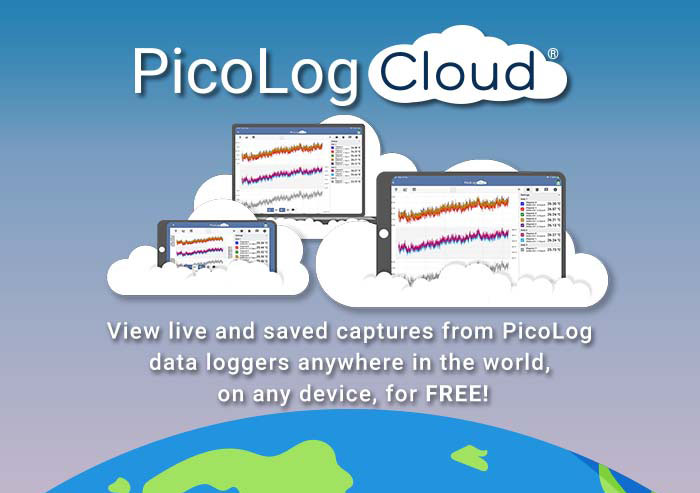 PicoLog Cloud, a free upgrade for all PicoLog users

Building on the proven design of PicoLog 6, PicoLog Cloud is a free upgrade that introduces many great new features that expand how your Pico data logger can be used. Both existing and new customers will benefit from the following new features:

In this free upgrade to PicoLog data logging software, your Pico data logger or oscilloscope not only captures to a local disk, but can now stream the capture directly to a secure online Cloud store. Did we mention our new cloud service is completely free for all new and existing customers?

This new major feature stays true to our vision of creating a data logging application with a simple user interface, and is equally straightforward for use by technical or non-technical users.

PicoLog Cloud is fundamentally the same application as before, but with enhancements to send the live capture data directly to your remote PicoLog Cloud space, and in addition view saved captures stored in the Cloud. 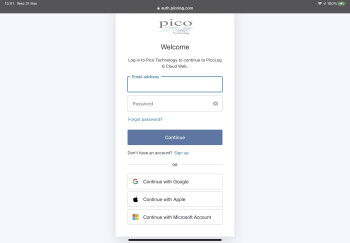 Security is at the top of the priority list with PicoLog Cloud, and we use the latest and greatest security techniques and processes to ensure your online data and credentials stay safe. To achieve this, PicoLog Cloud employs an Identity Management Platform to manage the login authentication process, keeping your identity anonymized and your data captures safely yours.

In everyday terms this means you log in with your email and password from one of the following email account providers: Microsoft, Apple or Google. If you don't have an account with one of those, you can create an anonymized account with another email address. To add an extra layer of security, make sure to use an email account that offers 2FA (two-factor authentication).

PicoLog Cloud storage is hosted on another industry service known for excellent reliability and global access; Microsoft Azure. It means you can rely on quality of service (uptime) and multiple server locations back up your data against the risk of a server outage. 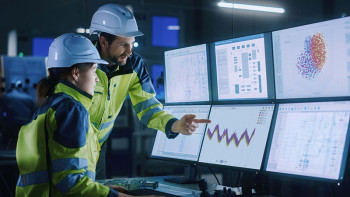 View live and saved captures anywhere in the world

Plugged into your PC or laptop, Pico's instruments have been harnessing the power of your computer's screen, processor, hard disk, keyboard and mouse for over three decades. There are very few limitations with this setup, but sometimes you just can't be in the same room, factory, city or even country as your data-capturing equipment.

Now, PicoLog Cloud opens a window into your loggers and captures allowing other PCs with PicoLog installed to view and export your data, from anywhere in the world. For security, that PC must be signed into your personal PicoLog Cloud account to view any of your captures, live or saved.

To keep things simple and avoid making unwanted changes to a live capture, modifications to the capture settings and configuration can only be managed by the host PicoLog Cloud app.

Can I view captures on my smart phone or tablet?

PicoLog 6 has always been based on a framework that uses Chromium (Google's open-source browser) and Java meaning it is already "browser ready".

It couldn't be easier to use! Navigate to the URL picolog.app in any browser and log into your PicoLog Cloud account. This gives you instant and secure access to all of your live and saved Cloud captures on any internet-connected smart device, anywhere in the world. Some browsers such as Google Chrome and Microsoft Edge make it possible to "install" the PicoLog Cloud as a PWA (progressive web app) so that the app will be available on your home screen or desktop, and works like a regular app. 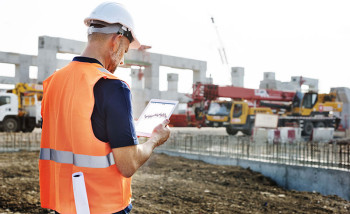 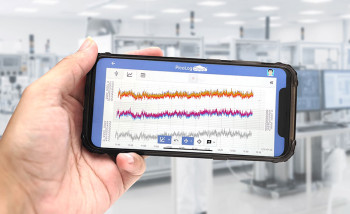 Continuous capture, with or without network connection

In the event your host PC loses network connection during a capture, PicoLog Cloud instantly switches to use the PC's own hard drive until the network connection is restored. Any missing data will be promptly synchronized back up to the Cloud. 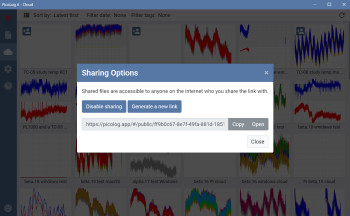 Share live and saved captures with a unique browser link

Under normal working conditions, only the user logged into PicoLog 6 Cloud who created the Cloud capture can view the live or saved captures either on the source PC, or remotely. However, publicly sharing the capture with anyone couldn't be simpler!

button of the capture you want to share and click Enable sharing. This produces a unique URL that you can share with anyone you choose by any method, such as email or social media.

Only you can search the waveforms that you have shared, and you can turn off sharing or generate a new link at any time.

This feature is only available when using a Cloud capture and not a local capture. 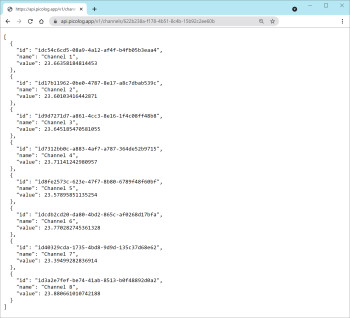 Transferring capture data from a data logger software application to a third-party application while the capture is running has been one of the longest outstanding customer feature requests, and had been very difficult to implement until now. Now that PicoLog Cloud data resides on a server, we've developed a simple server-side API that allows programmers to request the live data in batches which are returned in a human- and database-readable ASCII format.

This feature is particularly useful to users who want to add extra functionality such as emailing alarms or captures, adding logger data to existing databases, and displaying data in different ways such as fill tanks, percentage bars, throttle gauges and large numerical displays.

Once the Cloud capture is set up and acquiring data, public sharing for that capture must be enabled, and this will generate an unsearchable URL containing a unique ID for that capture on the picolog.app server. The API contains just 2 calls:

Although PicoLog Cloud is limited to 30-day captures in Cloud capture mode before it overwrites the oldest data, you can use this API to transfer and back up your data to a local or online database of your own.