Measuring the frequency response of a loudspeaker

Note - this application note is a few years old.  The Pico ADC-216 mentioned has been replaced by the PicoScope 4262. 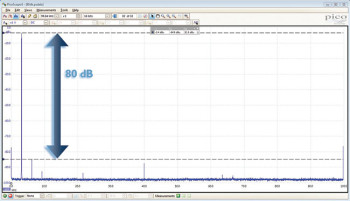 This application note describes a simple method for measuring the frequency response of a loudspeaker using the Pico ADC-216 oscilloscope. Normally, specialist equipment is needed to make these measurements due to the problems of echoes in the measuring environment. The method described here takes advantage of the triggering modes and built in spectrum analyser of the ADC-216 running with PicoScope.

The output of a loudspeaker is difficult to measure because it has to be done with a microphone. Measurement microphones are usually omnidirectional which means that they pick up, not only the output from the loudspeaker, but also any background noise and sound reflected from objects around the loudspeaker.

This means that echoes from the walls of the room where the measurements are done corrupt the direct output from the speaker. One solution to this problem is to build an anechoic chamber—a very expensive option. Another technique is to make the measurements outdoors with the test speaker and microphone at the top of a tower. This works well, but only on sunny days when there is no background noise.

A third alternative becomes possible if we can capture the output from the loudspeaker as a digital signal. Once the acoustic signal from the speaker has been digitised it can be analyzed mathematically. Suppose that we feed an impulse into the loudspeaker. The Fourier transform of the impulse is the frequency response, a sum that can be done easily in a computer. So, if we capture the impulse data we can find the frequency response of the loudspeaker. The trick is to choose which part of the impulse to transform. By deliberately truncating the ‘tail’ of the impulse we can effectively cut off the reflections since these arrive at the measurement microphone later than the direct sound. The reflections are removed by a window in time.

This windowing technique is very powerful and is used in many commercial loudspeaker measurement packages. Its chief disadvantage is that it is difficult to calibrate the microphone to show the absolute sound pressure level measured. This is because of the mathematical technique used (FFT) combined with the normal methods for mic calibration (use of piston-phones and so on). Even so the method produces good relative measurements.

If you need to make a set of measurements for comparison you must use identical settings for each. Otherwise the relative levels that you record will not be comparable.

There are a few fundamental rules that apply to this form of measurement.

Notes on the equipment

Follow this link for notes on the pulse generator and microphone.