Improving the accuracy of temperature measurements

Technology advances in the field of temperature measurement have led to a huge variety of sensors and measuring instruments now being available for making accurate measurements at relatively low costs.

This article takes a ‘back to basics’ look at three of the most popular temperature sensor technologies and offers advice on how to avoid the many pitfalls and traps that often destroy the accuracy of a temperature measuring system.

When most people have a requirement to measure a temperature, their first reaction is to purchase the highest specification, most expensive sensor and measuring instrument they can afford. Speaking as a manufacturer, this is a reaction we applaud as it sells a lot of equipment. It is however the wrong way to set about making accurate measurements.

Figure 1 shows sensors at three different heights record the temperatures in one of Pico Technology's storerooms. The sensor readings differ by at least 1°C so clearly, no matter how accurate the individual sensors, we will never be able to measure room temperature to 1°C accuracy. 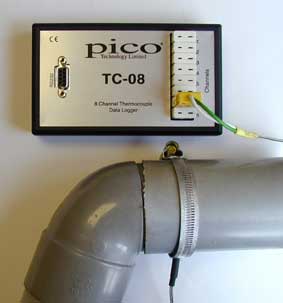 In Figure 2 a temperature difference exists between inner and outer surfaces of the pipe, and ambient air temperature and airflow around the sensor will cause additional errors. However, for practical and/or safety reasons, you may have no choice but to make your measurement in this way — in which case errors can be reduced by thermally lagging both the sensor and the section of pipe to which the sensor is attached.

In addition, give thought to how the presence of your sensor may actually affect the measurement. Figure 3 demonstrates this point.

Figure 3: In this experiment, high and low accuracy sensor and instrument pairs were used to observe the rising temperatures of equal volumes of water being heated. A large, expensive and accurate Pt100 sensor was connected to a PT-104 (both with 0.01 °C accuracy) and partially immersed in one beaker, whilst a low–cost thermocouple, connected to a TC-08 (0.5 °C accuracy), was immersed in the second beaker. Using the Pt100 sensor in this manner invalidated the accuracy of both the sensor and the instrument because of ‘thermal shunting’. The dissipation of heat from the larger, partially immersed probe into the atmosphere reduced the rate at which the water could be heated. Furthermore, in this experiment, the temperature of the PT100 never reached 100 °C even though the water did boil. The low–cost, lower accuracy solution afforded the more accurate and representative measurement.

Having considered what you are going to measure, the next step is to decide which type of sensor to use. The three sensors most commonly used in research and industry are: the thermocouple; the resistance temperature detector (RTD or ‘resistance thermometer’); and the thermistor. Table 1 compares and contrasts the three.

Table 1 — the most commonly used temperature sensors and their properties

* Linearity is not an issue if using modern digital measuring instruments, as look–up tables stored in memory provide compensation.

** Thermal response is considered for the measuring element only, not its enclosure.

In 1822, an Estonian physician named Thomas Seebeck discovered (accidentally) that the junction between two metals generates a voltage that is a function of temperature, and all thermocouples rely on the so-called ‘Seebeck effect’. Thermocouples are not, however, precision sensors: errors of 2 °C are typical. However, thermocouples have a wide temperature range (-200 to 2000 °C) and are often needed simply because alternative devices do not operate at the desired temperature. In addition, they are relatively low-cost and versatile.

Although almost any two types of metal can be used to make a thermocouple, a number of standard types are used (see table 2) because they possess predictable output voltages and large temperature gradients.

On a general note, avoid subjecting the thermocouple connections — and indeed the measurement instrument — to sudden changes in temperature, such as those produced by drafts, as this will lead to errors.

As mentioned, different choices of metals for the thermocouple's two conductors produce sensors with different characteristics. Table 2 summarises the most popular types.

* At 0 °C unless indicated. Many manufacturers offer ‘special’ thermocouples with improved accuracy down to 0.5 °C

If you need to increase the length of the leads from a thermocouple, use only the correct type of thermocouple extension wire. Using any other type of wire will introduce an undesirable thermocouple junction. Ensure any plugs, sockets or terminal blocks used to connect the extension wire are made from the same metals as the thermocouples and correct polarity must be observed at all times.

With signal levels from thermocouples measuring only microvolts, noise pickup can be a problem. Noise from stray electrical and magnetic fields is typically orders of magnitude higher than the signal level. Most measuring instruments reject any common mode noise (signals which are the same on both wires) — but this rejection is not perfect, so it makes sense to minimise the noise where possible. This can be done by routing wires away from noisy areas and twisting the two (insulated) leads of the thermocouple cable together to help ensure both wires pick up the same noise. If operating in an extremely noisy environment (such as near a large motor) it is worth considering using a screened extension cable.

A final note on thermocouples: decalibration. This is the process of unintentionally altering the makeup of the thermocouple. The usual cause is the diffusion of atmospheric particles into the metal at the extremes of the operating temperature range. Another cause is impurities and chemicals from the insulation diffusing into the thermocouple wire. If operating at high temperatures, check the specifications of the probe insulation. In addition, it is always good practice to use thermocouples with insulated junctions as this helps protect against oxidation and contamination.

Another common type of temperature measuring device is the resistance temperature detector — the most stable and accurate (although expensive and fragile) of the three sensor types discussed in this article. The electrical resistance of any metal varies according to its temperature — in most cases resistance increases with temperature and is said to have a positive temperature coefficient (PTC).

Perhaps the most common type of RTD is the platinum resistance thermometer (PRT), the practical operating range of which is -250 to 850 °C. Depending on type, RTDs have an accuracy of between 0.03 and 0.3 °C. The most frequently used PRT is the Pt100 — so called because it has a resistance of 100 Ω at 0 °C.

PRTs are either wire–wound or metal film resistors. Of these, the latter exhibits the faster response time. As a Pt100 sensor is basically a resistor, its value can be measured with an Ohmmeter as per figure 4. However, the low resistance of the sensor and its low sensitivity (0.385 Ω/°C) make accurate measurements difficult due to lead resistance. A 1 Ω resistance in each lead connecting the Pt100 to the meter will cause an error of more than 5 °C.

To avoid the problem of lead resistance errors, most Pt100 measurements are made using a 4-wire configuration (figure 4). Here, two of the wires are used to provide an excitation current and the other two connect a voltmeter over the PRT. Provided the impedance of the voltmeter is high then a few Ohms of resistance in the cables will not cause an error.

Figure 4: The 4-wire configuration (right) affords the best accuracy, but beware: low resistance and low sensitivity of the RTD place considerable demands on the measuring instrument and a compromise has to be made between excitation current, noise and resolution.

Excitation current should be as low as possible (< 1 mA) in order to minimise self–heating of the sensor. This reduces the sensor’s output voltage, the signal to noise ratio (through increased noise pickup) and resolution of the instrument. Fortunately advanced instruments are to hand. The new PT-104 from Pico Technology, for example, uses a drive current of only 0.25 mA yet — thanks to a novel design and use of a 24 bit analog to digital converter — still provides 0.001 °C resolution.

For high accuracy measurement, self-heating errors should always be taken into account — and values for drive current and self–heating for a given sensor should be available from the manufacturer. Physically small sensors have self-heating errors as high as 1 °C/mW in free air. A 1 mA drive current into 100 Ω dissipates 0.1 mW, so causes a 0.1 °C error. Using a physically large sensor will minimise self–heating errors, but can lead to thermal shunting errors (as demonstrated in the experiment in figure 2).

The small signals from a Pt100 sensor lead to noise pickup problems similar to those encountered for thermocouples and the same precautions against pickup should be used.

One final trap that often catches the unwary is the existence of two different compensation curves. The DIN 43760 standard, also called the ‘European Curve’, is 0.385 Ω/°C for a Pt100 sensor. However, there is also an ‘American Curve’ based on platinum wire of a higher purity (often used for reference standards), and this defines the temperature co–efficient as 0.392 Ω/°C. Of the two, the European curve is the more dominant (even in America) and most measurement instruments compensate for it. If however, the PRT has an American curve and the instrument is compensating for a European sensor, then a small error will result.

Many people unfairly regard thermistors as inaccurate sensors. This may have been true in the past, when thermistors had 5% tolerances at best. For extreme accuracy the RTD is still the best choice, but modern thermistors are not far behind. Thermistors with 0.1 °C accuracy are now widely available and at very reasonable costs. They have a fast response time and a greater output per °C than RTDs.

As with RTDs, thermistors also exploit the fact that a material’s resistance changes with temperature. However, the majority of thermistors employ a metallic oxide and have a negative temperature coefficient (NTC). Thermistors provide relatively high accuracy (0.1 to 1.5 °C) but only operate over a limited temperature range: –100 to +300 °C. Furthermore, no single thermistor will cover this range and a lack of standards means it is often necessary to buy the sensor and measuring equipment together. The thermistor’s response is non-linear and, as with RTDs, we must avoid providing too large an excitation current through the thermistor because of self-heating.

Connection to instruments is a simple 2-wire configuration, as — unlike RTDs — we do not need to compensate for lead resistances: this is small compared to the thermistor’s resistance (typically between 1 and 100 kΩ).

Thermistors, because of their high sensitivity, are ideal for detecting small changes in temperature — especially when it is the change and not the absolute value that is important.

Having chosen our temperature sensor, and ensured we are using it in such a way so as to reap all of its benefits, all that remains is to get the most from our measurement equipment. Here, check the accuracy specifications of the instruments as these vary widely between types of instrument and manufacturers. In some cases, when using RTDs for example, the majority of system error may come from the instrument. When using thermocouples however, the measurement instrument usually has a small error when compared to the sensor. With thermistors, because they have look-up curves particular to the device, it is usual to purchase matched sensors and instruments together from the same manufacturer.

For accurate measurements, calibration is a must and where possible instrument and sensor(s) should be calibrated together as a system.

High precision temperature measurement is possible through the use of well-specified and suitably calibrated sensors and instrumentation. However, the accuracy of these measurements will be meaningless unless the equipment and sensors are used correctly.