The jet engine, as used by the majority of today’s aircraft, is the most familiar use of the gas turbine engine, but gas turbines are also used in trains, ships, tanks, and alongside steam turbines in power stations to generate electricity.

In a gas turbine engine, a pressurized gas — usually air — is used to spin the turbine. Air that enters the engine is mixed with a burning fuel such as propane or jet fuel. The heat produced by the burning fuel causes the air to expand and rush past the turbine causing it to spin.

A gas turbine engine has a greater power–to–weight ratio, and can produce the same power with a smaller engine than a conventional reciprocating (piston) engine.

Unfortunately gas turbine engines have their disadvantages too. Typically turbines can spin at over 10,000 rpm – with speeds exceeding 100,000 rpm not uncommon in smaller turbines, this combined with the high temperatures the engine is subjected to make designing and manufacturing gas turbines expensive. Gas turbines operate most efficiently under a constant load and a gas turbine will use more fuel that a reciprocating engine during idle, or if the load fluctuates.

A Pico data logger was used to log various parameters of an Auxiliary Power Unit for the purpose of keeping records of the engine speed and turbine Exhaust Gas Temperatures — important for safe operation of the engines, and to allow PID speed control systems to be analysed and adjusted for stable operation. 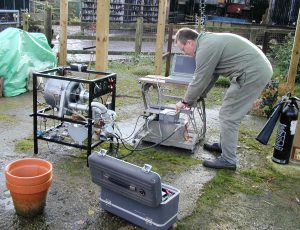 The Auxiliary Power Unit or APU was originally used in Military applications, as the prime movers for either ‘air producers’ or for electrical generators. These small turbines offer low weight, high power output and use the same oil and fuel as the main engines in helicopters and jet aircraft.

The ‘air producer’ is basically a turbine powered low–pressure high–mass flow compressor. The compressed air is ducted to a small cold air turbine, which is connected to the main engine in order to spool it up to starting speed. As an electrical generator, the turbine can be started and run continuously to provide ground power to the aircraft in order to keep it combat ready. When the aircraft is despatched for its mission the APU switches from ground power generation to engine start mode. 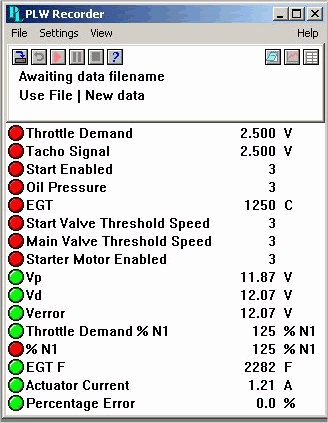 PID is an acronym for Proportional, Integral, Derivative. In simple terms, PID controllers operate by measuring the input of a device and then maintain this at a set level by making changes to the output, by doing this the PID controller eliminates the need for the operator to make continuous adjustments in order to maintain a stable system.

For use with the turbine system a PID loop controller was constructed and the data logger was used to test its effectiveness whilst the turbine was operating. Using PicoLog data logging software a graph of the test results was produced, as shown below (Figure 4). 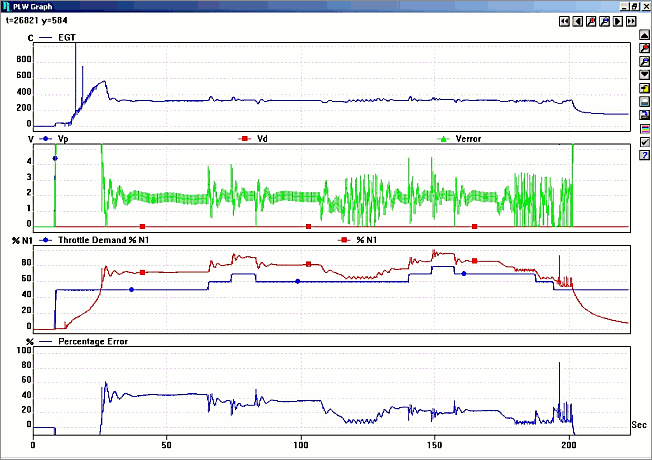 From the results it can be seen that early on in the test, the loop error is large (throttle demand is 50% and the actual speed is 72%) and also the engine response is oscillatory to step changes in throttle.

The logged data shows just how bad the initial design of controller was, and significant development work was required to achieve the required balance of accuracy and stability.

This application notes was submitted by Roger Marmion — for full details of Roger’s projects with gas turbines visit his Gas Turbine Project.