The PQ215 probe holder and PCB holder kit is a valuable accessory to your PicoScope 6000 Series oscilloscope. It has been designed exclusively for use with the 2.5 mm probes included with every PicoScope 6000 Series oscilloscope past and present (TA061, TA062, TA101, TA151, TA133, P2036 and P2056). Included in the kit is an A4-sized (about 11" x 9") steel base plate, four PCB holders, four probe holders and eight colored elastic cable ties. The kit is ideal for making hands-free measurements, for PCB inspection, and even as a soldering station!

With strong magnets at their base, the four gooseneck probe holders offer a flexible way to position the probe tip while holding it firmly poised in place. Their unique design employs a precisely weighted probe holder that pushes the sprung probe tip just enough to make a good contact on your PCB or unit under test. The probe holders include eight pairs of silicone cable ties in the PicoScope channel colors (blue, red, green, yellow, purple, gray, light blue and magenta). These stretchy rubber ties secure the probe cable to the probe holder gooseneck, adding stability and also a neat way of identifying which probes are connected to which channels, which is handy with a four channel oscilloscoope and especially useful with an eight-channel oscilloscope! 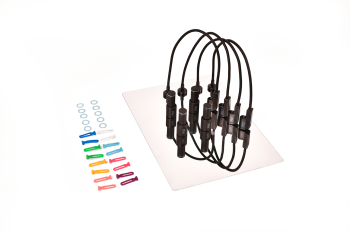 Accessories for the Probe holder kit, no probes